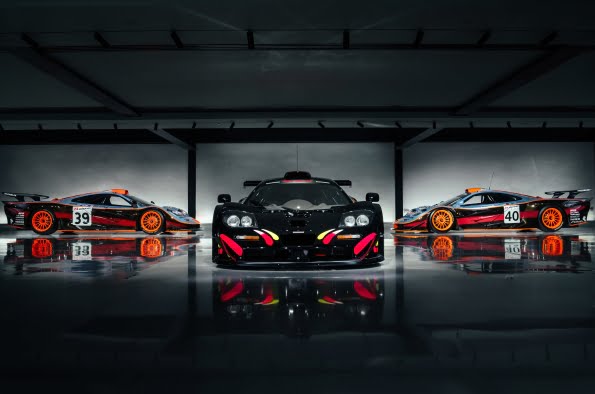 Uncovered at Thirty – Classic Driver and Kiklo Spaces celebrate the McLaren F1 with a dozen-car line-up.

Thirty years ago, the prototype of the McLaren F1 was unveiled at the 1992 Monaco Grand Prix. Since then, the McLaren F1 has become the ultimate icon of modern car design and engineering. Between 1992 and 1998, only 106 cars were built, making the F1 the ultimate unicorn supercar and holy grail of collector cars. To celebrate the 30th anniversary of this certified legend, Classic Driver and Kiklo Spaces have gathered a wonderful lineup of over a dozen highly significant McLaren F1 road and race cars for ‘Uncovered at Thirty’, a private enthusiast event.

The car, the myth, the legend

The history of the McLaren F1 is one of the great tales of the automotive world. Conceived by the gifted engineer Gordon Murray, backed by visionary entrepreneur Ron Dennis and designed by the influential designer Peter Stevens, the McLaren F1 redefined the supercar when it was first introduced in 1992. With its streamlined lightweight architecture, Grand Prix-inspired central driving position, unbeatable 6.1 litre V12 engine, and iconic shape, the McLaren F1 soon became the ultimate must-have car of the 1990s. Famous owners include Ralph Lauren, Rowan Atkinson, George Harrison, Elon Musk, Jay Leno, Nick Mason, Lewis Hamilton, and the Sultan of Brunei, among many others. And the McLaren F1 was quick, very quick. In 1998, the XP5 prototype piloted by Andy Wallace captured the world record for the fast production car, reaching 240.1 mph, setting a benchmark for decades to come. While the McLaren F1 had been designed for public roads, it soon proved to be highly competitive and successful on the track as well. The most memorable triumph was certainly the 1995 24 Hours of Le Mans, where a McLaren F1 GTR won the race after 17 hours of steady rain, being followed by its sister cars claiming the overall position 3, 4 and 5. It was the first and last time a new manufacturer has won Le Mans outright on the first attempt.

Since then, praise of the McLaren F1 has been sung again and again, and prices have steadily climbed to new heights. While ‘regular’ road cars are now trading hands for over $20 million, the even rarer GT and GTR versions are worth significantly more. However, as headlines about the latest auction records are getting louder, it is becoming more and more difficult to listen to the countless fascinating stories and anecdotes from the people that shaped and witnessed the rise of the McLaren F1 in-period. For this reason, Classic Driver and Kiklo Spaces have chosen to fade out the noise of the hype, put the spotlight on the individual cars, and gather some of the important people that played such a fundamental role in the success story of the McLaren F1 for a night to remember.

A birthday party with over a dozen McLaren F1s
On the 13th September 2022, Classic Driver and Kiklo Spaces have assembled over a dozen McLaren F1s and a small number of high-profile guests for their ‘Uncovered at Thirty’ private anniversary event. Taking place at Kiklo Spaces, a new space for car culture in Hampshire, United Kingdom, the line-up of McLaren F1s includes some of the most remarkable road cars, as well as a stunning selection of iconic, short- and long-tailed GTR race cars. There is, for instance, chassis 043, one of the most original F1 road cars in existence, in a unique colour that matches the livery of chassis 01R, the overall winner of the 24hrs of LeMans in 1995. Chassis 02R, the most prolific winner of all F1 race cars will also be on display, as will be chassis 19R, the very first of the “long tail” F1 GTR race cars from 1997.

Among the guests and panelists about to share their most memorable F1 moments and unheard anecdotes will be Peter Stevens, the F1’s designer, as well as David Clark, the commercial director of McLaren when the F1 was new, Paul Lanzante, the team lead of Kokusai Kaihatsu Racing, overall winners of the 24 hours of LeMans with the F1 GTR chassis 01R, and Andrew Frankel, the automotive journalist that drove and wrote about the F1 first.

Furthermore, Classic Driver and Kiklo Spaces have joined forces with George Bamford of Bamford Watch Department to create a limited-edition, retro-futuristic wristwatch commemorating the unique event. The Bamford B347 ‘Uncovered at Thirty’ automatic monopusher chronograph features a carbon-style dial with sub-dials reminiscent of the McLaren F1’s iconic instrument panel, a gold monopusher inspired by the famous exhaust cover, and a titanium case with custom engraving. Only five pieces will be made and are for sale exclusively for guests at the ‘Uncovered at Thirty’ event.

Quotes from the people behind Uncovered at Thirty
“When Classic Driver was founded in 1998, the McLaren F1 had just gone out of production”, says J. Philip Rathgen, CEO of Classic Driver. “But since then, the F1 has accompanied us as the ultimate sportscar ever made and has never been surpassed, the absolute benchmark of engineering and design at the turn of the millennium. For this reason, we wanted to celebrate the 30th anniversary of the McLaren F1 in a truly special way – and we are delighted that, together with our friends from Kiklo Spaces, we are now throwing the ultimate birthday party for one of the greatest cars ever built. It’s a dream come true.”

25 years ago, Classic Driver started connecting buyers and sellers of the world’s most desirable collector cars online. Since then, the classicdriver.com website, high-value marketplace, trend-setting magazine, and influential social media channels have become the leading gateway to a higher form of car culture for a global community.

Chris Vassilopoulos and Luke Rebelo of Kiklo Spaces had the following thoughts: “The McLaren F1 to us represents the absolute pinnacle of purist performance motorcars. Engineered by the best and built from the best materials at the time in the industry during McLaren’s peak success period, the McLaren F1 is genuinely one of those creations that is more than the sum of its parts. Uncovered at Thirty is an opportunity to share the inside story of the car that quite literally rewrote the rule book. Hosting Uncovered at Thirty at our garage space together with our friends at Classic Driver has given the best platform to present the F1 in the proudest possible way”

Andrew Frankel, celebrated automotive journalist and F1 enthusiast, had this to say: “It seems hardly possible that three decades have passed since we first saw what would become, and to this day remains, the most remarkable supercar ever launched. I remember experiencing it for the first time and realising that everything I’d driven up until that point, including all those other wonderful supercars of the late 1980s and early 1990s, were no preparation whatsoever for the McLaren F1. It wasn’t in the same street, postcode or district; it was over the hills and far away. So it is wonderful to know that so many F1s are going to be gathered together to celebrate this momentous anniversary, and my congratulations to everyone involved in ‘Uncovered at Thirty’ event. I can’t wait to see them all there and catch up with those instrumental in their creation back then, and those lucky enough still to own and drive them today.”

Last but not least, the ‘Uncovered at Thirty’ event has been made possible thanks to the kind support of our sponsors, Investec, Citi Private Bank, and Hagerty. The cars have been securely transported with our trusted partners at Mack Logistics.