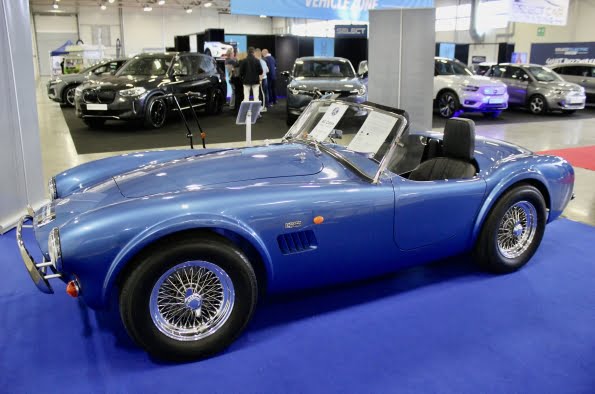 The new AC Cobra Series 1 electric made a stunning debut at last week’s British Motor Show, with the tens of thousands of attendees enjoying the car as part of its public premier.

As Britain’s oldest vehicle manufacturer in continuous existence,  AC Car’s new Series 1 electric is the next chapter in a story that stretches back 120 years. The legendary marque is ushering in a new generation of high-performance, hand built electric sports cars, with is first model being the AC Cobra Series 1 electric.

Retaining the craftsmanship and iconic styling that the Cobra is world famous for, underpinned by a market leading electric drivetrain developed by Derbyshire partner Falcon Electric, the AC Cobra Series 1 electric was a hit over the four days of the show.

Alan Lubinsky, Chief Executive of AC Cars for more than two decades, said: “This was our first chance to show off the car, and the positive response was overwhelming. There’s so much adoration for the AC Cobra, whether you’re six years old or over 60 – and the chance to share and enjoy people’s stories was fantastic. It shows that our best of British approach – combining an iconic car with cutting edge technology – will be a sure-fire hit.”

The static debut as part of the Select Electric Motor Show this year’s Farnborough event showed off the car’s timeless design but with a modern electric powertrain.

With a 0-62mph time of around 4secs, and 500 Nm of torque (peak), the Series 1 electric is as potent as AC Cobras of old, but now comes with a range of around 150 emissions-free miles.

A world away from the numerous imitators and look-a-likes, the AC Cobra Series 1 electric provides owners with an expertly crafted, brand-new electric car that’s fully energized and ready to drive. Wearing the all-important AC Cars chassis number, and limited to just 58 examples worldwide, its place in the British brand’s cannon is already confirmed.

AC Cars is now finalising the Series 1 electric, along with the first deliveries to customers, as well as working on the development of a series of new cars, which includes the AC Cobra Series 4 electric announced in June.

More information is available on the AC website, www.accars.eu