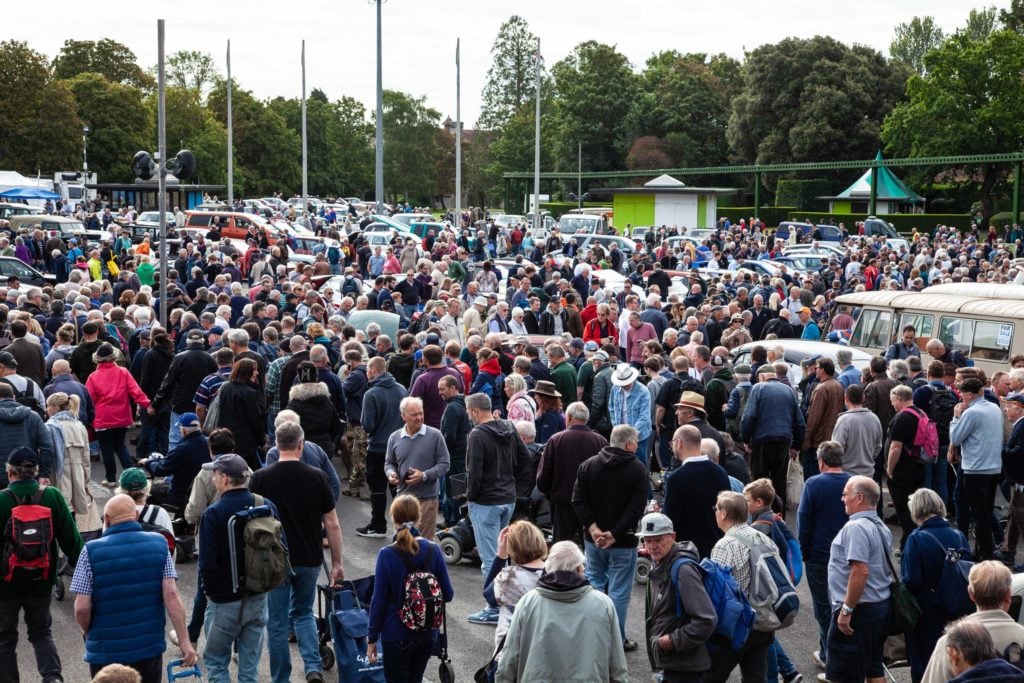 And thats me on the right..There was an impressive line-up of classic cars celebrated the golden age of motoring as the brand new Golden Oldies display made its triumphant debut at Beaulieu’s International Autojumble on September 7th and 8th.

Enthusiasts brought more than 50 historic motors from the 1920s – 1960s for the display, while 33,293 event-goers snapped up bargains from 2,176 stands packed with motoring spares, accessories and automobilia.

Driving more than 1,000 miles from Sweden especially to take part in Golden Oldies in the grounds of the National Motor Museum was a 1954 Wolseley 4/44, which had just been put back on the road by Nostalgia magazine after being unused for 30 years.

Also travelling from the Netherlands was an eye-catching 1952 Singer Roadster 4AD Ute and once-common 1969 Volvo 145, while an imposing 1964 Rolls-Royce Phantom V and diminutive but rare 1959 Fairthorpe Ashley Special showed the diverse range of the collection.

Turning heads were an unusual 1963 Ford Cortina Mk1 hearse and 1922 Bentley 3/4.5 Litre that had been a racing car and fire engine in its varied life. A period-perfect 1943 Morris Z van, exactly as it was when in service as a Post Office Telephones engineer’s van, sleek 1969 Marcos 3-litre with space-age styling and rarely-seen 1957 Standard Family Ten parked up amongst Jaguars, Triumphs, Sunbeams, MGs, Austins and Morrises.

In additional features of the event, eager bidders competed for astonishing rare and collectable cars in the Bonhams sale on Saturday. Towering over the lots was a colossal 1942 DUKW amphibious vehicle, which sold for £43,700, while a 1952 Rover 75 from the hit TV show All Creatures Great and Small smashed its estimate to sell for £6,670. Another TV star car was the 1908 Napier 45hp limousine, which starred in Downton Abbey, Peaky Blinders and Mr Selfridge and sold for £235,750. A 1966 Humber Imperial once owned by the politician Jeremy Thorpe and in need of restoration sold for £1,265, while the 1979 Bentley T2 personal car of Margaret Thatcher while she was Prime Minister and 1927 Rolls-Royce originally owned by King Edward VIII both failed to sell.

Entering into the fun of the show were the winners of the Best Stand Award, with Peter and James Sheppard from Cornwall, David Stevens from Hertfordshire and Colin Feyerband from Bedfordshire all dressed in white coats behind their autojumble stand. David explained: “We’ve shared a stand for 40 years and this year we are pretending to be doctors, prescribing spare parts to cure classic car ailments. Colin had retired and sold his laboratory to buy a Ferrari, so we have plenty of lab coats on sale with our usual automobilia and general motoring spares. We’re all delighted to have won the award, it’s made our autojumble!”

A special presentation also took place for Trevor Godson, who has attended every Beaulieu autojumble since 1967 and cycled to most of them from his home on the Isle of Wight. To mark his impressive track record, 83 year-old Trevor was presented with a copy of Edward, Lord Montagu’s autobiography Wheels Within Wheels by Beaulieu’s Managing Director Russell Bowman.

Trevor said: “I just love the show, where I can collect odds and ends for my motorcycles and cars. I used to cycle seven miles to Beaulieu, then walk another six miles around the autojumble, before cycling back to the ferry. The wind always seemed to be against me on the ride home. One year, I bought a spare motorcycle tyre and carried it on my neck as I rode home, only to find I’d bought the wrong size! Another year, I bought a heavy-duty drill and put it in the basket on my bicycle but the basket fell off due to the weight.”

Practical Classics’ stand revealed the magazine’s new restoration project, a rare 1981 Renault 14TS, as well as the 1959 Standard Ten Bluebell that was saved from Ford’s scrappage scheme. The team met readers and chatted to show-goers throughout the weekend.

The Morgan Sports Car Club shared a collection of its members’ cars, ranging from the popular 4/4 to the legendary Plus 8, in another special display.