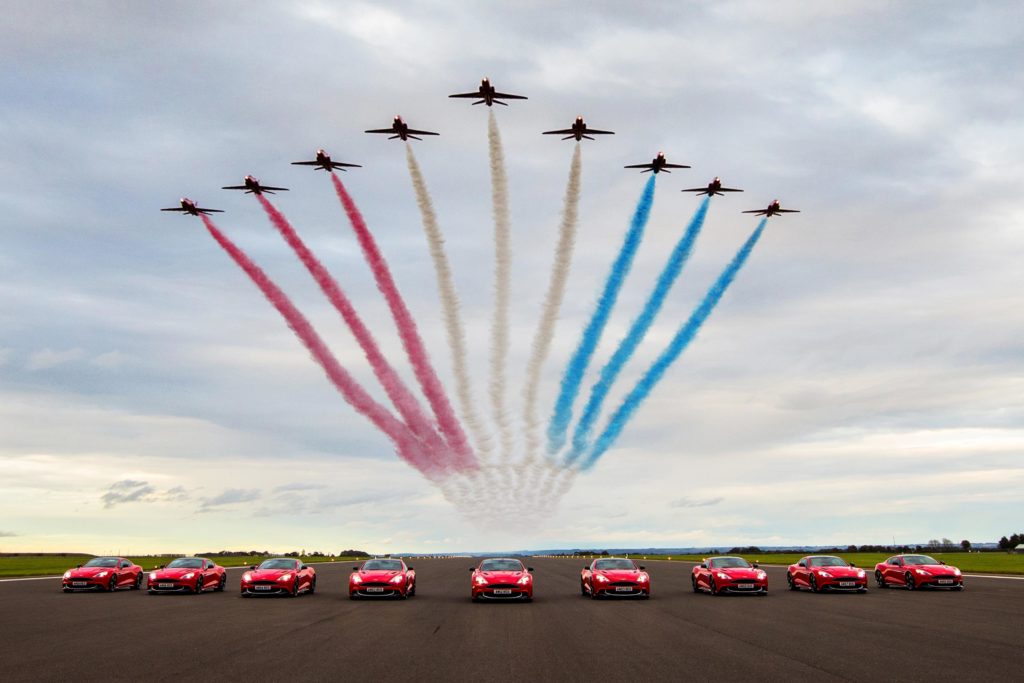 13 November 2019, Gaydon, UK: Aston Martin today revealed the formation of the Aston Martin Wings Series, which brings together all of the luxury marque’s aviation-related projects.

Aston Martin has a long and proud association with aviation and in particular the Royal Air Force. Three of its four UK manufacturing locations are situated on former RAF stations at Gaydon, Wellesbourne and St Athan, where a state-of-the-art manufacturing facility has just been built inside ex-MOD Super Hangars.

This heritage and strong connection to the RAF has led Aston Martin to bring its aviation projects together under “Aston Martin Wings”, an exciting programme which will see Aston Martin’s bespoke service, Q by Aston Martin deliver further limited edition models linked to aviation over the coming years.

The inspiration for Aston Martin Wings was the Aston Martin Vanquish S Red Arrows edition. Built in 2017 after a Q by Aston Martin: Commission from Aston Martin Cambridge, these special cars contained exquisite details linked directly to the aircraft, for example each of the Vanquish S Red Arrows built contained switchgear made from the undercarriage leg of a Red Arrows Hawk aircraft.  Just ten examples of the cars inspired by the Red Arrows were produced, with nine sold to customers before “Red 10” was raffled, raising an astonishing £1.46 million for the RAF Benevolent Fund.

Another aviation project was the V8 Vantage S Blades Edition, named after the famous British aerobatics team. Featuring bespoke styling and interior tailoring, all five Blade Edition Aston Martins were delivered to customers during a very special day at Sywell Aerodrome where each new owner was treated to an aerobatic flight experience with The Blades.

During both World Wars, Aston Martin’s factories were called upon to build aircraft components, most famously for the Spitfire and Mosquito in WW2.  The V12 Vantage S “Spitfire 80”, again commissioned by Aston Martin Cambridge through Q by Aston Martin, celebrated one of the most iconic designs in British history and the 80th anniversary of the Supermarine Spitfire’s first flight.  Now in the hands of eight proud owners, the Duxford Green-painted cars are easy to identify as they bear the trademark Spitfire yellow pinstripe on the side strakes and deck lid.

Aston Martin President and Group CEO, Andy Palmer, has very close links to the RAF and is in fact an Honorary Group Captain in 601 Squadron, Royal Air Force. He said: “Aston Martin will always be synonymous with aviation, from our wings logo to the heritage of our manufacturing sites across the UK. The Vanquish S Red Arrows edition was a great success for everyone concerned and I look forward to seeing our future aviation-related special editions.”