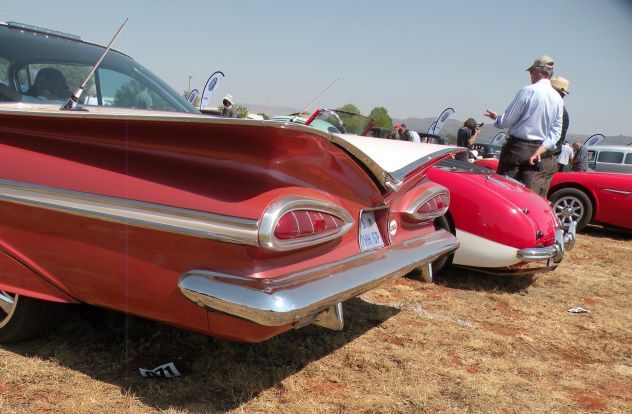 Our man Aubrey Maldon in South Africa provides us with an update on Classic Car events and activities on the not-so-dark Continent.

A CAPUCCINO AND A BLISTERNG DAY!

Hello fellow SVA members. It’s good to be with you, even though we are miles apart.

First, our spring has sprung, and secondly, we have become untethered by the government, or relatively so, from the tortuous tourniquet of endless, but necessary lockdown regulations.

The first major event of the season beckoned us from being anchored in our homes, our cars in our garages, and us in Zoom meetings and glued to the rubbish served up on our TV screens.

The 24th of September was our Heritage Day, a public holiday here. And coincidentally our wedding anniversary (I am married to a lovely lady I met here in South Africa, Veronika, or ‘Ronnie’ to her friends. We were married in the little church next to the Fuller’s Brewery in Chiswick, London W4. Very happy times which continue today).

Heritage Day, Covid rules and regs permitting, is celebrated here in many ways, but our way is to hold a large meeting (well, large for us in the Colonies) of like-minded people. The meeting was to be in Heidelberg, about 60 kms South East of Johannesburg.

A mixture of models and marks as shown

It’s an annual event for cars, bikes, planes and trains.

We set off onto the motorway around 8.30 am with a posse of Ponies (a few lively Mustangs- two Mach I’s and a ’62 tin-top that had all been generously muscled-up) a massive ‘62 Impala SS, whose contribution to the profits of the Detroit steel industry must have been significant, and another Impala, a 2-door pink pillar-less, from ’59. A roaring ‘66 Corvette, piloted by our leader flew like a rocket, darting ahead. A far from stately (speed-wise that is) silver and brightly chromed ‘34 Rolls Royce Phantom 11 kept a steady 60-70 mph, and majestically guarded our rear. In all we were in a convoy of 10 cars.

We met up about halfway, in the already heavy heat reflecting off the roasting road, with temperatures reaching well above the 30oC mark. There was a real mixture of models from many eras. But we were united by one technicality. No air-con. All windows and orifices were open to encourage and direct any relieving breeze into the car and onto our bodies. There were Ford Model A’s from the late 20’s to 1930’s and 1934 V8’s from my club (all right-hand drive and built-in Canada). A bevvy of MG B’s and A’s and Buicks’. Heavy Healey’s and light-footed Alfas’, and, when we got to the field an Aston from the 1980’s that stood next to a Maserati of the same period, both vying for eyeball time, and getting it. As did the pristine and agricultural Land Rover Series 1, and the cute little red Ford Model A truck, and the heavily winged Cadillac that I would guess must have been owned by some political official in days gone by.

For us here in South Africa the show was not just a show of meticulously preserved metal and mechanics but a show of the love and care that exists for the conservation of vehicles, any vehicle, from two wheels to four, from the turn of the last century, right up to the 1990’s. And this particular day, Heritage Day, aptly reminded us that these vehicles, all 250 or more, were, as it were, of mixed race of colour and creed. They were part of our own private heritage, ones to be coveted, cherished and, within our kind climate, well protected, to hand down, and onto the generations that would follow us.

Woven into this colourful display of shapes and sizes I detected (by the telltale acrid smell of a drop of oil) was a fine wavy line of parked vintage bikes, including Harley’s (the meek and mild ones from the 1920’s) the Royal Enfield’s from the same period, BSA’s, a Singer, Sunbeam, and a plethora of other magical marques. Probably 50 in all. And when the time was right, a white handkerchief was waved in the air, and at the first kick of the pedal they all coughed and spluttered, and without exception miraculously wheezed into action, and then wiggled and wobbled off to join the parade in the nearby town. Leaving behind tiny puffs of smoke and a small memento of their momentary stay at the field. The obligatory drop of oil, on the dry turf.

The parade of vintage and classic planes was equally impressive. From the tiny Tiger Moths’ dwarfed by the beast of a Stearman and the window rattling American Harvards’ whose Pratt and Whitney’s barked and bellowed into action giving us, the crowd of around 500, a neck exercising display. There must have been around 70 aircraft in the field, drawn to the day like moths to a light. A handful of Chipmunks, Cessnas’, Piper Cubs, Fokkers and the hairy buttock clenching aerobatic XtremeAir Sbach XA42’s and the dipping and diving micro-lights trying to deal with the thermals and battling. A  Stork wore its original battledress, and a family of Barn Storming Bi-planes after a blistering and mind-boggling display parked near to what I thought was a Dakota.

We swerved the barbeque

Exhausted by the heat we sought refuge from the searing sun. So we swerved the barbeque lunch laid on at the event, in preference for a drive to Bedfordview (about 60 kms away) and a comfortable chair at a long table, in the cooling shade of a line of umbrellas in the Italian Club. Pasta, pizza, salads, steaks, water and friends. And at last a cappuccino, as the coffee machines at the field had failed us!

In South Africa, we have the very best for our cars. A kind climate, mechanical camaraderie of note and a criss-cross of roads, to give our cars a healthy run. And, given the size, and economical activity of our population, quite a considerable, and diverse collection of vintage, veteran and classic cars. Some of us own one or two, others are lucky enough to have collected quite an Aladdin’s Cave full of cars, with private collection often exceeding the 100 mark.