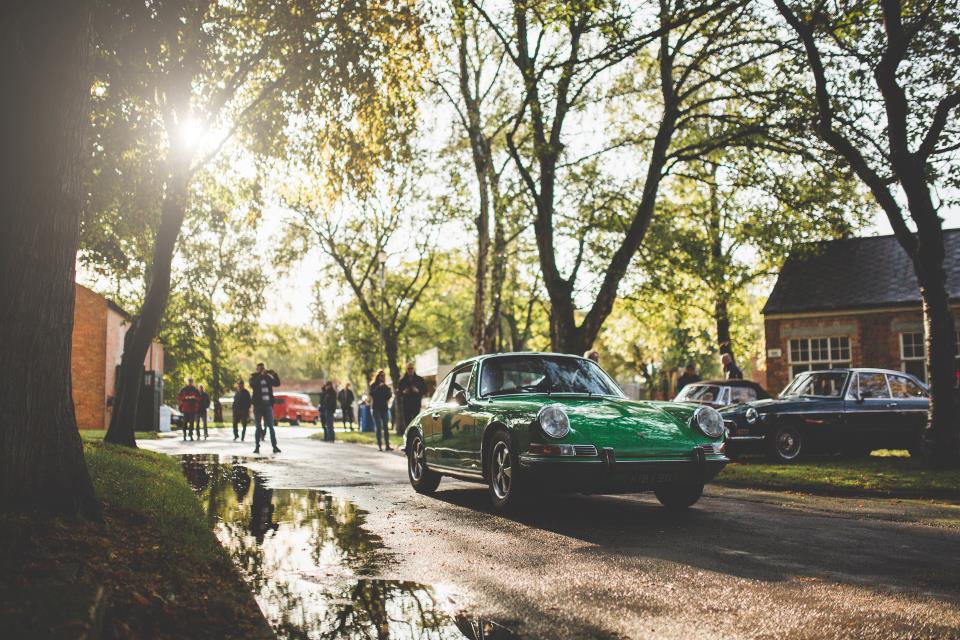 30 owners clubs attended classic and vintage bike display in Hangar 113 and BMW Heritage exhibited a selection of star cars from all eras. Historic F1 cars wowed crowds throughout the day and the Ian Callum-designed Aston Martin Vanquish 25 made an appearance.

Sunday 6 October 2019: More than 6,000 enthusiastic motoring aficionados flocked to Bicester Heritage for the final Scramble of 2019, which featured a glorious selection of vehicles from Abarth to Zagato, as well as historic F1 cars and a unique Aston Martin Vanquish designed by Ian Callum.

Among the wide range of vehicles that filled both the Bicester Heritage Technical Site and the airfield beyond it, were examples of world-class exotics through to now-rare models, such as the 1965 Ferrari 275GTB which sat alongside a wonderfully original 1964 Trabant saloon that had been driven from East Berlin by the original owner’s daughter.

Daniel Geoghegan, Chief Executive of Bicester Heritage, said: “Thank you to all who joined us for the October Scramble in what felt like a coming-together of all that is good in the historic motoring world. The combination of the relaxed atmosphere, opportunity to talk with the 40 specialists at Bicester Heritage and diverse collection of cars and motorbikes was clearly a winner for enthusiasts and their families.”

Creating a noisy spectacle and delighting motorsports fans were a pair of historic Formula One cars on open display. Mercedes-Benz AMG delighted crowds by programming one of its heritage F1 cars to play “God Save the Queen” with its engine.

Also on display were the 2011 Marusia MRV-02, eye-catching in its red and black Virgin livery, and the 1998 Minardi M198-V10 which could be heard across the site when it was fired up and put through its warm-up cycle throughout the morning.

There was something for everyone including supercar enthusiasts who were treated to a rare public viewing of the Ian Callum-designed Aston Martin Vantage 25, of which only 25 will be made. The legendary designer was also on hand to talk about the car and explain how he went about creating it.

BMW UK displayed the highlights of its UK Heritage collection. Stars of this were the 1938 BMW 328 roadster and the original BMW supercar, the 1978 BMW M1. The display of BMW Heritage examples was joined by a curated ‘Bavarian Motor Lawn’ that was provided by the BMW Owners Club UK. Highlight vehicles from this display included a 635CSi from the 80’s, and a wonderfully original 1939 328 Frazer-Nash, which was provided by on-site specialist, the Historic Endurance Rally Organisation.

New for the October Scramble was the classic bike display in the Events Hangar 113. The motorbike display drew enthusiasts of all ages, who explored the assembled machinery that ranged in eras from the dawn of motorcycling to the latest exotic superbikes. Also in the Events Hangar celebrated automotive artist Ian Cook, known as PopBangColour, held a live demonstration of his skills as he rendered a 2019 Honda Fireblade 1000RR superbike in acrylic paint on canvas using a remote-controlled car as his paintbrush.

Newly appointed Events Producer for Bicester Heritage, Laura Hamilton-Gould, said: “The wonderfully diverse selection of cars, and owners and enthusiasts of all ages who attended the October Scramble is phenomenal.

A Bicester Official said: “As the home of historic motoring, it is a pleasure to be able to welcome such a broad selection of machinery to the Technical Site and witness the increasing enthusiasm from the public for the Scramble events. It has been a magnificent end to a year of great events on site and we are already looking forward to the first Sunday Scramble of 2020, which will be held on 5th January.”

The former RAF Bicester has a vision to become the world’s leading automotive destination for motoring past, present and future and SVA member Heritage Engineering is a perfect example of a Bicester business thriving in this specialist environment; https://www.specialistvehicleassociates.com/members/heritage-engineering-ltd

For historic motoring, Bicester Heritage is now the industry focus for the future alongside creating a revolution in historic vehicle ownership. The unique location is the UK’s only centre for historic motoring excellence and is the national centre for a £5.5bn per annum industry that employs over 34,000 skilled people. Founded in 2013 Bicester Heritage has gone from a standing start to a home for 40 specialist businesses, and growing, with a collective turnover of over £40m, making it the largest player in the industry and set to grow exponentially with a global reach.

The unique ecosystem of businesses based at a beautiful 444-acre former WW2 RAF Bomber Training Station acts as ‘marina-like’ cluster, promoting skills and expertise, employment, qualified customer footfall, shared business incubation and aggregate growth. Collectively, Bicester Heritage is all about driving the future of the past.

The former RAF Bicester site, on which Bicester Heritage is now based, is of national historic importance. Neglected for the best part of 40 years, it was added to Historic England’s ‘At Risk Register’ in 2008 and designated the most ‘at risk’ of all Defence Estates in the UK.

Since Bicester Heritage’s tenure, over 93% of the buildings have been delicately restored or re-activated for modern business use, with the site now held as a national exemplar of constructive conservation by Historic England. The time-warp base is truly unmatched in evocative character, with even the paint colours being correct to 1930s British Standards. An active airfield and test track complete its dynamic operation.

The location of Bicester Heritage of course, is key. Bicester is one of the fastest growing towns in Europe with unrivalled connections via road, rail and air, situated in close proximity to the globally known City of Oxford and within 90 minutes of upwards of 30 million people.

For more information about the site and the team behind it, see www.bicesterheritage.co.uk.