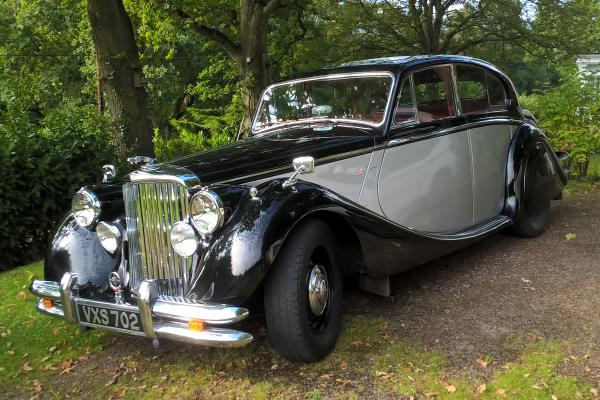 Classic Car Auctions first sale of 2020 will get underway at the Practical Classics Classic Car and Restoration Show at the NEC on the 28th and 29th March.

With consignments being accepted, some of the first consigned cars are British beauties and fine examples of the marque.

A very popular model and one that did very well last year is the Mk1 Jaguar. This 1958 3.4 Litre saloon has had some subtle upgrades which only improve what is a wonderful car. It was imported from New Zealand fairly recently by the vendor and has a Heritage Certificate which confirms the originality of the car. This Mk1 is the rarer manual with over-drive and has been upgraded with the Mk2 front suspension. This lovely Jaguar is finished in Pearl Grey with re-trimmed red leather front seats and new carpets. It has also had a full service and comes UK registered with import documents, NOVA details and more history. Possibly the most stylish of Jaguars estimated at £25,000 to £30,000.

If you are after grace and style of the early fifties how about a Mark V Jaguar. CCA has a 1950 model with the super smooth 3.5 litre straight-six engine, which was delivered new to New Zealand and repatriated to the UK in 2016. The Mark V was only built from 1948 to 1951 and at the time was considered rich with unostentatious looks. Beautifully presented in two-tone paintwork Masons Black over Shell Grey, estimated at £16,000 to £20,000 this is a wonderfully crafted British motorcar.

In 1959 MG launched an updated version of the MGA to include a slightly more powerful engine along with differing indicators and lights but included a 1600 badge on the boot. This 1961 MGA 1600 Roadster has been extensively restored after it was imported from the USA in 2017. Presented in Chariot Red after a bare metal respray with Cream leather seats it now looks very smart on steel wheels with a chrome luggage rack on the boot lid. Now UK registered, with an MOT until December 2020 and freshly serviced, this is a lovely left-hand drive example estimated at £20,000 to £25,000.

Triumph is our next British marque with a 1974 TR6 consigned and estimated at £20,000 to £24,000. Initially supplied new in the UK this Triumph then went abroad before returning to UK shores in 2017. Upon its return, it has been extensively restored, including a bare metal respray in Pimento Red with re-chromed bumpers. The interior is finished in Portland Grey with re-veneered dash and door caps. The engine has also been rebuilt and includes a slightly racier camshaft. A lovely matching numbers TR6 with overdrive and a Heritage Certificate in splendid order.

Gary Dunne Classic Car Auctions Manager commented: “Delighted to open our catalogue for our first auction of 2020 with these fantastic cars. We have already had a tremendous response, with lots more cars being consigned.”

“We finished last year with one of our best auction results and the start of this year is showing no signs of wavering. The quality already confirmed is stunning.”

“The Practical Classics Classic Car and Restoration show is a highlight event for us and we are delighted to again be their auction partner.”

Viewing takes place on the 27th March between 10am and 5.30pm with the auction getting underway on Saturday 28th and Sunday 29th from 12pm.

They can also be contacted on 01926 640888 or by email enquiries@classiccarauctions.co.uk and would be happy to talk with you and help you through the process of consigning your car, alternatively, you can also use their online Value My Classic service.