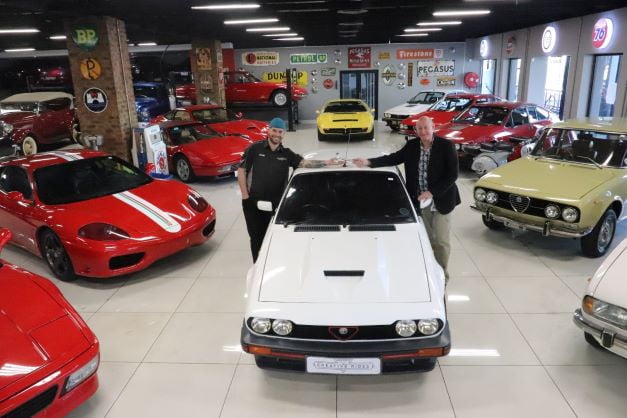 The Hagerty Market Rating, which measures the strength of America’s enormous classic car trade sector, reached an all-time high this month, reflecting the overwhelmingly bullish sentiment this industry is experiencing across the world.

Kevin Derrick, Founder and CEO of Creative Rides Classic and Collectables Auctions, the largest specialist classic automotive auction company in Africa, says a growth estimate of US$12.5 billion (R198.75bn) was forecast by international analytics company Statista for the global classic car market over four years from 2020 to 2024 off an initial value base of US$30.9bn (R491.3bn), “but the market has gone into overdrive this year with several collector cars jumping in value by more than 30%, so that four-year estimate will have to be revised upwards”.

The number of collectors has also risen dramatically in recent years, according to Derrick.

“Passion will always factor into classic car ownership, but investment-buying has escalated sharply in the economic uncertainty of the past two years.

“Classic cars slot into the niche investment category of appreciating moveable assets. They’re like fine art and quality gemstones; you can keep them close and move them at a moment’s notice, but unlike cash under the mattress their rising values grow your wealth.”

Creative Rides is hosting one of the most spectacular multi-million-dollar classic car auction events on the 2022 global calendar in Johannesburg, South Africa, on July 2nd, when more than 115 exclusive models will go under the hammer.

The remarkable auction will span nearly 90 years of automotive design and feature a number of highly sought-after collector cars rarely seen on the global market in recent years.

Derrick says a detailed analysis of the global Ferrari market by Hagerty in October last year noted that “there are collector cars, and then there are Ferraris… The cars that Enzo (Ferrari) built are in many respects a market unto themselves…”.

“Ferrari has been an automotive investment market-leader for 40 years, with the first major collecting wave starting in the 1980s.

“A new trend that’s emerged in the past few years, though, is an impressive appreciation in the values of more recent models, most dramatically the 1987–1992 F40, but also for much newer cars like manual 1996–2006 Maranellos – one of which we’re auctioning at Montecasino next month.”

Derrick says nine Ferraris will be among more than 30 rare, sought-after Italian automobiles on the auction block.

Another Italian lot stirring global bidder interest is a 1984 Alfa GTV 6 3L, one of only 212 ever built.

“In December last year Creative Rides had the pleasure of auctioning a GTV 6 3L for the first time, and we were astonished by the tsunami of inquiries about the car, and the subsequent sale that went from US$12 600 (R200 000) to a closing bid of approximately US$70 000 (R1.1 million) in a matter of seconds.

“Many unsuccessful bidders from December’s auction are already registered for next month’s sale, because the GTV 6 3L is a classic investment car.”

US manufacturers will also be well represented at the auction, according to Derrick, because South Africa’s enthusiasm for collecting muscle cars continues to grow.

“But until recently this was more a pursuit of passion than profit. Barring the stand-out rare collectables that are perennial record-breakers, for the past decade the global muscle car investment market has been fairly static.

“Local collectors were absolutely right to follow their instincts, though, because since the beginning of this year the market has rebounded to levels not seen since 2008.”

Hagerty data analysis published at the end of April notes that Dodge Chargers posted some of the most notable gains, with sale prices rising an average of 30% to 40% since late 2021.

“This bodes extremely well for bidding on the 1973 Charger we’ll be auctioning on July 2nd, because it’s a red-hot investment right now. The same goes for our first-generation Camaro SS (1967-69) lot, which has also exploded in value this year by a staggering 35%.”

“Baby Boomers may still be buying the most super cars right now, but the majority of classic car insurance clients internationally are Gen-Xers, Millennials and even Gen-Zers.

“What’s also incredibly interesting is how youthful enthusiasts are broadening traditional collector car horizons with their passion for Asian automotive design and in doing that, influencing market values.

“Over the medium term, it means more enthusiasts will be after a widening subset of automobiles they consider collectable, which bodes well for a healthy investment market for some time to come.”

He says investor buyers should also keep in mind the wide-ranging definitions of classic and collectable cars when approaching auctions.

“Classic cars are broadly defined as those that are 30 years or older, which means that every year thousands of cars join the pool of stock available in the classic category.

“Collectables can be classics, but they don’t necessarily have to be as old as the strict classic definition.

“The biggest factor in defining a newer collectable is scarcity. Car manufacturers design special and often very limited numbers of particular models, which are built for groups of clients that are marquee followers.

“As a result, these special editions will often be immediately desired and collectable, despite the fact that the cars are new and modern. This scarcity-determined limited-edition type collectable will generally be an investment opportunity.”

Derrick says the July 2nd unreserved and reserved auction at Montecasino in Johannesburg, South Africa, starts at 11am sharp (Central African Time). The hybrid live and online auction will be streamed across Creative Rides’ website and social media platforms.

Visit the Creative Rides Auction Website to view the complete auction catalogue and to register for the auction. Contact Creative Rides at admin@creativerides.co.za for information on remote bidding.

SVA Says: The SVA is delighted to work with quality and informed Classic Car businesses around the world and particularly pleased to now be increasing its membership in South Africa. The climate, enthusiasts base and values make South Africa a hot spot to both own and to import from. The Specialist Vehicle Association has a wide range of specialist transportation companies who can not only ship but will hand hold through all the importation needs for Owners and Collectors wanting to buy there.