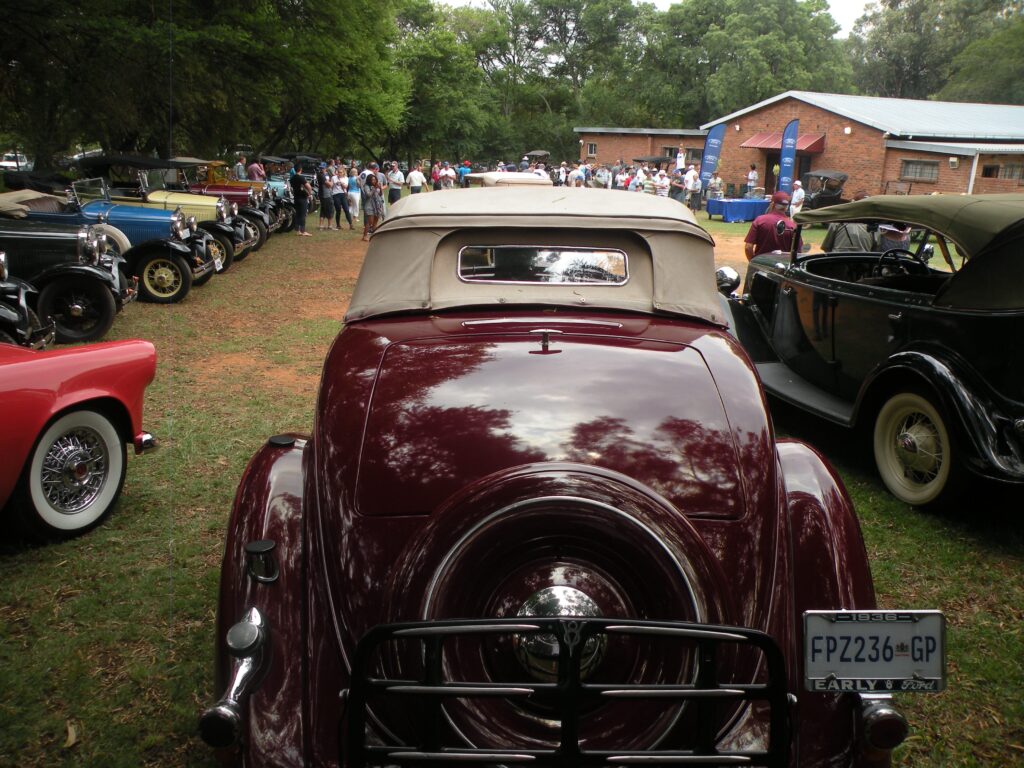 Classic Cars in South Africa are Hotter than July!

Classic Cars in South Africa are hotter than July! Around the world, classic and collectible cars continue to be hot properties, to buy and collect. Values at auctions bring in millions of pounds and owners see some of their cars exceeding their pension pots in some cases! So our ‘Man in South Africa’, Aubrey Malden updates us on what is happening on the dark Continent.

THE RARE AND EXTRA-ORDINARY COLLECTABLE CARS IN

South Africa’s kind climate is one of the reasons why we have become a hot
country for overseas eyes focusing on our collectable cars. They are
generally very rust-free. The hinterland climate is very dry. Bone dry in some
places. Once it has rained it doesn’t hang around a bit. The sun pops out, the
steam rises from the roads (a glorious sight) and, wallah, the moisture has
gone. The road is bone dry again. And so are the cars.
The other reason why South African-made cars are popular in the UK (and
another 70 countries around the world) are they are all ‘Right Hookers.’
‘Right Hookers’ or Right Hand Drive cars.

South Africa, like the other ‘Right Hooking Countries’ was formerly part of the
British Empire, which decreed that the rule of the road was to keep left in
order to avoid collision, well that was the theory of it anyhow!
The first car arrived in 1896, a Benz Velo, for President Kruger. The industry
started properly in the 1920’s with factories in the Eastern Cape, Gauteng and
Kwa Zulu Natal.
Initially, it was the American brands that dominated, including Ford and
Chevrolet, with Ford building their first assembly plant in Port Elizabeth in
1923.

General Motors joined soon afterward producing Ceves Buicks, Oldsmobiles
and Pontiacs. In the mid-1960s Ford and GM still controlled over 60% of the
local car market with Fords and Chevrolets dominating until the mid-1950s
when the German and British small cars began to impact. In the early 1960s
Studebaker became VW set up by managers from Ford PE who went on to
develop VW-USA for the German company. By the late 1960s Toyota, Datsun
and Mercedes were all developing factories in SA, and British makers were
being eased out.

South African cars are generally coddled and cuddled.
They have to be. There is literally no real public transport and from the 1920’s
cars were essential for any private transport. The roads were the kingdom of
the needy and wealthy. They were the essential lifelines over the vast rolling
mountains and into the deep valleys of this beloved, yet testing country.
The entrepreneurial spirit of South Africans led them to not only deal in
cars (and trucks) but as owners, servicing and repairing them themselves.
And doing it well too, as no one wanted to be stuck with a broken clutch cable
in the middle of a searing semi-desert, or up/down a mountain pass, or in the
middle of the wilds of Safari savanna without a reliable set of brakes and
perhaps more importantly, an accelerator that worked!

Even today I am staggered at the number of people here who meticulously
look after their cars themselves and have a garage full of every possible tool,
lift and compressed air-driven gun you can think of. And there are many,
“Bush Mechanics,” who amongst them can magically repair a vehicle with a
Swiss Army Knife, a bit of tape and a twig. I saw it myself, from a man whose
father once owned one of the biggest dealerships in the country (VW and
Porsche).
So again, the cars are well sought after, as they are fit and healthy on the
inside, as well as on the outside.

But there are more reasons why SA cars are becoming sought out.

South Africa is a veritable gold mine of brands.
Not only are they right hookers, and rightly regarded as being in good nick,
there’s a right good selection of marques and models to choose from.
Chevies, Willys, Pontiacs and Fords from the 1920’s onwards and upwards.
From Impalas, Elcaminos, Capris, Escorts, Sierras, Sunbeam Alpines to
locally assembled Tigers.
Dodge and De Soto. Studebaker and Saab.
South African customers, pre-war, tended to opt for American cars, due to
their soft springs and ride-height, given the poor quality of the early roads. As
roads improved though, after the war, European cars were increasingly
gaining admirers. Brands like Volkswagen, Volvo, Peugeot and Borgward
(sadly not, in my opinion, as admired as they should be today) were gaining a
foothold in the market along with, and eventually, a full range of majestic
Mercedes. Still one of the most popular and now collectable cars here today.
The build-quality of the saloons in the late 70’s, 80’s and 90’s beating
anything a farmer, or dirt-road could throw at them back-in-the-day, or indeed
tomorrow.

World-Class muscle from the 70’s and 80’s
Just like South Africa made some of the steamiest, hottest, and most powerful
rugby players the world has ever seen rumble onto the rugby field, it is
perhaps a little known fact that the same goes for the expansive muscle put
into South African cars of the 70’s and 80’s.
They became world-beaters and are highly collectable.
So why did it happen?
I think it’s fair to say that South Africans, by their very nature and upbringing
are adventurous people. And with adventure comes curiosity. Add to that the
need to excel and that requires risk. In a modern word, “Balls.”

The fuse was probably lit by the plethora of American, Australian, English,
German and hot-blooded Italian manufacturers who had factories here,
initially to produce solely local versions of their usually tame and popular
models. But the view of some of the locals was that they didn’t want to be cut-
off from the rest of the world’s action.
So although pornography was banned, the viewing of imported films with
throbbing engines and rippling, roaring racing was not. It became an
inspiration.
Over time, performance enthusiasts persuaded the car companies to
introduce limited edition models with powerful engines and drive-train
combinations that fans couldn’t get anywhere else in the world. This is how
South African muscle cars were born. A roaring, rocking and rolling recipe of
US, Aussie and European flavours tweaked and twiddled in the fanatics’
garages and factories, all under the African sun.
Soon world-beaters rolled out of the garages, onto roads and tracks.
By way of example BMW produced the first M Series cars here, long before
they did in Germany. In ’76 the special model was the 530 Motorsport Limited
Edition.
Their fiddling and fettling resulted in an almost fully race-prepared six-cylinder
3.0-liter engine that had a beefed up head and internals. The result was a
fantastic 274 HP from just 3 liters. This made this four-door sedan one of the
fastest, most powerful passenger cars in the world at that time.
They went on to produce the monster of a car, 286 HP of brutal muscle, the
rare BMW 745i.
Alfa, aided and abetted by the locals cooked up and delivered the unique Alfa
GTV 3.0L. Now as rare as an honest politician and, in its day, faster than a
political u-turn.
Ford joined the heated fray and fired up their Ford Sierra XR8. Chevy brought
over the SS from Aussie and tweaked it a little for the SA market. And boom,
another SA winner!
And so on. The cult goes on today. Just open the doors of the garages and
warehouses, or the pages of websites hiding them away and see for yourself.
Rare and available, if you know where to look.

The ordinary. Extra ordinary as well.
If there is such a thing as an “ordinary vehicle” SA serves up a whole host of
them. Usually all well preserved. Some locked away, untouched for years, in
large and small collections, now being unlocked and seeing the light of day.

These cars, on the road and in garages, include the early Fords (the T’s and
Model A’s and 1930’s V8’s) and the later Capris and Escorts, the MGs (TC’s
and TD’s, A’s and B’s) the Daimlers (including the SP250’s). Jaguars of
course (particuarly the Mk 2’s, E-Types, and XK’s) Astons from the various
years. Bentleys and Rolls. Alfas, Bugattis, all the Mercs from various years,
Sunbeams, Morrises, Land Rovers (including their own special ‘Brand Mark’
the loveable oil leak) and Range Rovers. Of course there are many VWs
(from the Beetles and Safari buses onwards), stunning Porsche 356’s
upwards, including Cabriolets and a few rare Speedsters. Triumphs through
the ages and a host of American cars. Most dating from the 1950s, Chevy
Belairs, Corvettes and Elcaminos, Mustangs, Cadillacs, Buicks (including the
Boat-Tails) and then moving up the rarity tables, I have recently spotted a
1938 Packard 8 Coupe and an Auburn.

A playground of clubs and cars.
At the last count there were around 80 car clubs here. Scattered evenly
around the country.
Some clubs deliniate membership by manufacturer of vehicle, others by
marque.

I am a member of several clubs including the Vintage and Veteran Club,
which caters for every type of car and bike, and owner of course. A diverse lot
of people we are too. Accountants, engineers, pilots, safari guides,
programmers, bankers and marketing folk amongst us. With vehicles to match
our tastes and pockets. From Stanley Steamers, Bentley Blowers, Rolls and
Rileys, Sunbeam Alpines, Morrises and Mini Minors, E Types, MG A’s and
B’s, Moons, Mercs, Mustangs, Micro cars and Masseratis and more. We have
around 300 active members who own around 800 vehicles between us. The
website, though, is not reflective of the Club, yet!
Like other countries we have some very professional, genuinely honest and
reliable car traders, and individuals who collect and sell. And excellent
exporters as well. And like other countries we have just a few that put their
rank, and indelible stain on our wonderful hobby, and business. Many of
whom I have got to know ( and keep a list) and give a wide berth to.
But in short, folks. What a lot we got … well worth a butcher’s on the web, or a
visit, once sensible travel permits…let me know if I can help.
Aubrey, Your Man in South Africa. aubrey@forensic.co.za