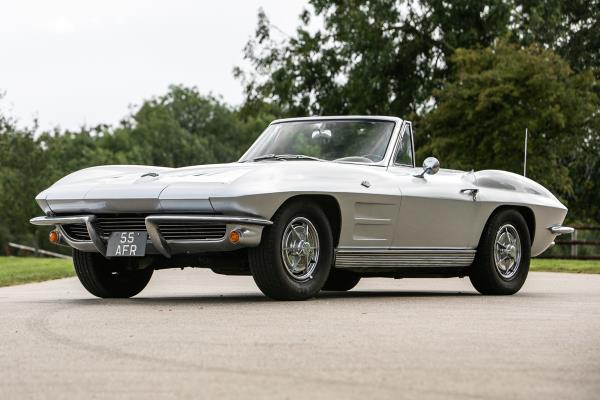 ROCK AND ROLL HITS THE NEC THIS NOVEMBER!

Silverstone Auctions are proud to be offering a Corvette Stingray formerly owned by the British pop legend Sir Cliff Richard in its forthcoming sale at the Lancaster Insurance Classic Car Show on the 9th and 10th November.

Keeping him in good company is another pop sensation’s car to shout about. Owned from new by Lulu a gorgeous Mercedes-Benz 280 SE 3.8 Coupe.

This stunning 1963 Corvette Stingray was bought new by Sir Cliff Richard in March 1963, at the time he was dominating the British pop scene. He also had a fondness for American cars as he described on Top Gear in 2010 mentioning this Corvette as possibly the fourth car he owned.

In 1965 he sold the car and by 2012 our vendor purchased it from Corvette specialists, Claremont Corvette. Coming with the car is a history file detailing the work carried out including more recent work, a full respray and the worn vinyl seats replaced with leather. The log books with the name Harry Rodger Webb and his signature at the time are included plus some photographs of Sir Cliff in the car.

With 69,000 miles on the clock this Corvette Stingray does have the original Delco radio, just imagine that, the radio that Sir Cliff Richard listened to as he probably sang and created his next hit single.

If this Corvette Stingray could talk, just imagine the stories it could tell, the history it holds, the sixties legends that have sat in this car with their arm resting on the door as they cruised from gig to gig with the roof down. Estimated at £50,000 to £60,000 need we say more!

Well yes we do, as we also have the 1971 Mercedes-Benz formerly owned from new by Lulu who had taken the pop world by storm in the mid-sixties with her hit single Shout which was followed by many others as well as representing the UK in the Eurovision Song Contest and singing the title track to James Bond film, The Man With The Golden Gun.

Lulu owned this Mercedes for three years when it was sold to an Arabian businessman and then to a Mercedes enthusiast who owned it for thirty-eight years before the current vendor purchased it in 2018.

It has been maintained to an excellent standard and lightly used in the last few years. In common with Sir Cliff Richard’s Corvette, it too has the original Becker Mexico radio cassette player installed which Lulu would have listened too as she travelled the country.

This Mercedes has been part of a significant car collection and has been enjoyed and cared for by the current owner, estimated at £65,000 to £75,000 this a great car to shout about.

Harry Whale Silverstone Auctions Auction Manager commented: “Here we have two fabulous cars that were both owned from new by two of our most famous British pop stars at the height of their careers.”

“We are honoured to be offering these cars with such an incredible history. As both Sir Cliff Richard and Lulu were taking the pop world by storm at the same time, just imagine if they end up in the same collection.”