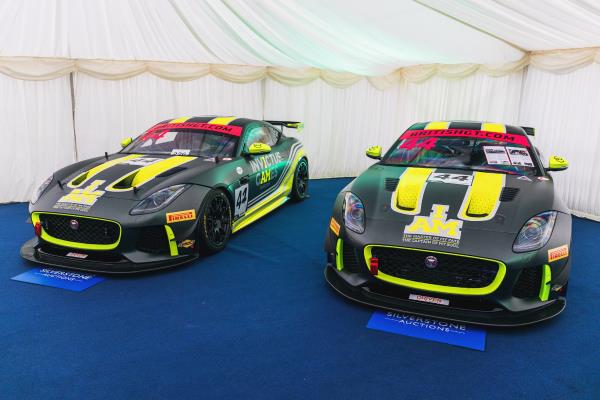 SVA Official working partner Silverstone Auctions hit the proverbial ball out of the park once again at their Competition car auction held at Race Retro last week.. The SVA visited the display pre-auction and the competition range was fantastic, including two unique twin sets of Jaguar and Aston’s built with many additional parts included, making them a staggeringly unique buy!

Silverstone Auctions first sale of 2020 got off to a fantastic start with their competition car sale on the opening day (Friday) of the Reis Race Retro show held at Stoneleigh Park at the weekend.

The auction catalogue was full of stunning competition cars from historic examples to the most recent Jaguar F-Type GT4. With significant interest and enthusiastic bidding, a sales rate of 70% was achieved with £1.5 million in sales.

Harry Whale Silverstone Auctions Sales Manager commented on the weekend: “We always enjoy coming to Race Retro, such a great show and for us and a great way to kick off the year.”

“We had some very notable cars on offer and the bidding for Lot 220, the Subaru Impreza WRC S12B , was fascinating to watch with one very determined bidder ensuring he was going to be taking it home.”

“Our classic car sale on Saturday had some superb cars on offer and with James Bond very much in the news, it was appropriate that our highest selling car was the Silver Birch DB5.”

Rallying is very popular at Race Retro and whilst the sale was underway it was accompanied by the sound of 120 rally cars blasting around the venue.

A car that is always going to attract interest is the WRC Subarus and none more so than the last one Colin McRae drove and one that Petter Solberg campaigned in the 2007 World Rally Championship. Bidding was intriguing as £189,000 was achieved for one of motorsports most notable and historic rally cars.

Another lot with a wonderful story was Lot 226 the pair of Jaguar F-Type SVR GT4 race cars and spares. A project created and funded by Superdry founder James Holder for the Invictus Games Foundation, gave injured servicemen the opportunity to compete in motorsport at one of the highest levels. Huge sums of money were put into this project and now provide a future opportunity for the new owner, who purchased the cars for £213,750.

We spoke about rallying going on in the background, but in the auction room Lot 228 the 1987 Audi Quattro S1 Evo re-creation caused a stir selling above its higher estimate for £110,250. No surprise really as these cars are the definitive of Group B and even a re-creation like this always draws a crowd.

The Porsche 911 RSR is a truly special Porsche. Just 49 were built which meant they were not easily obtainable and therefore those that wanted one created an hommage. Lot 206 a 1973 2.8 RSR FIA historic GT race car, is one of those, superbly crafted to replicate the RSR. Such is the rarity of these types of cars it sold above the higher estimate for £101,250.

Saturday was for classic cars with 68 on offer and with several significant cars going under the hammer, there was a lot of interest in the room.

As mentioned earlier with the new James Bond film No Time To die very much in the news, any Silver Birch DB5 was going to attract attention. Lot 432 the 1964 DB5 was beautiful and sure enough, the new owner thought so too and gave it a new home for £708,750.

Lot 440, the 1965 Jaguar E-Type Series 1 was a very special car, having been treated with significant love and attention by Eagle, the E-Type re-engineering specialist. During their care, it gained a few upgrades, which only improved the car but retained its good looks. The new owner clearly approved at it was sold for £233,438.

Lot 410, the 1992 Lancia Hyena Zagato. Talking to people it was clear this car divided opinion. Zagato, famous for its take on certain classics, used finished HF Integrales to create the Hyena. Fiat refused to be involved with this project, hence how they were produced and in such few quantities, thus making them very rare. The successful bidder has a very special car, number nine of 20 for £168,750.

Lot 439 was a real treat, the 1967 Ford Mustang GT Fastback 347 is a one-off muscle car. When you looked under the bonnet you could see why and it sold for £92,250, surpassing the higher estimate by quite some way.

The 1987 Ford Sierra RS500 Cosworth Chassis #003 attracted some very enthusiastic bidding and sold for £78,750. The lucky bidder now has one of the four prototype cars in their ownership and a real piece of Ford history in the development of the Sierra.

“All these cars mentioned here are really very special and we are delighted they have found new homes. I look forward to seeing the next chapter for the Jaguar GT4 race cars.”

Silverstone Auctions are accepting cars for their next sale at The Donington Historic Festival which will also incorporate a sale of Porsches. If you would like to consign your car into the sale on the 2nd and 3rd May, the team can be contacted on 01926 691141 or email enquiries@silverstoneauctions.com and would be happy to talk with you and help you through the process of consigning your car.