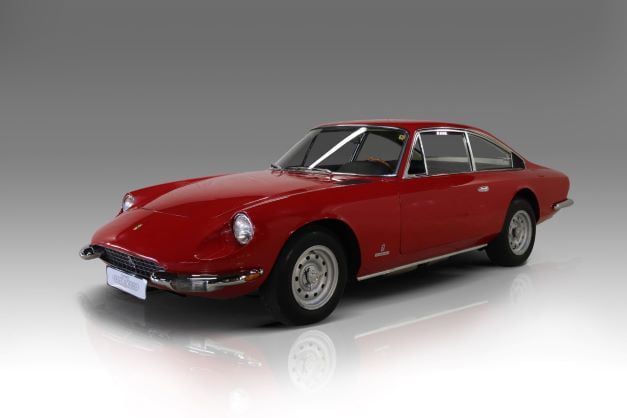 Hammer falls at US$171 000 for South African Auction Hot Lot 1968 Ferrari! In one of the most recent red hot sales in Africa.

The most expensive car sold at Saturday’s international classic car auction in Johannesburg, South Africa, was a rare 1968 Ferrari 365 GT 2+2, which was snapped up by a South African collector for US$171 000 (ZAR2.79 million).

But according to Creative Rides Classic and Collectables Auctions CEO Kevin Derrick, the marathon auction’s most popular cars by far as measured by registration numbers per lot and the ferocity of bidding, were American muscle cars and South African-built classics such as a 1984 Alfa Romeo GTV6 3L.

“We’re delighted with Saturday’s event, which was an unmitigated success on all fronts. Hundreds of bidders from five continents participated in the sale that drew a live audience of approximately 1 000 people through the course of the day.

“From this auction 90% of the cars were bought by locals and will stay in South Africa. The remaining 10% will be shipped to their new owners across the world within the next few weeks.

“International bidders with whom we’re communicated subsequent to the auction are over the moon; they brought Dollars, Pounds and Euros to a sale conducted in South African Rands and as a result of their strong currencies now own classic cars they might not otherwise have been able to acquire at home.

“If you consider the fact that US$1 converts to approximately ZAR16.50 and £1 to around ZAR20, classic car collectors across the world should focus more on South African auctions because their money stretches a lot further.”

Derrick says the top 10 hammer prices on Saturday were:

Derrick says Saturday’s top sale price beat the company’s previous auction record by a staggering US$104 000, which was set in December last year when a 1983 Alfa GTV6 3L was knocked down for US$67 300.

“We actually set two new records at this auction; one for the top-seller and the other for the highest ever South African auction price achieved for an Alfa GTV6 3L – US$72 200.

“Bidder interest in the GTVs and a last-minute addition to the catalogue, a 1972 Ford Fairmont, was unprecedented in Creative Rides’ auction history.

“The GTVs were bought by South African collectors but the Fairmont, which was knocked down for US$51 400, will be going to Australia.”

“There’s as large a local collector market for American muscle cars as there is globally. Ensuring that these collectors have a steady supply of quality auction stock is important for investment collectors because it keeps the trade alive.”

Derrick says Saturday’s event reached an online live-stream audience of more than 8 000 viewers across 16 countries, and the company is already fielding queries about its next auction.

SVA Says: Given the weather conditions in South Africa in relation to classic car longevity and the hugely popular interest from discerning owners, collectors and enthusiasts, South Africa is an excellent source of some fine vehicles. Creative Rides who is an SBA Trade Member is helpful and will assist in arranging shipping documentation and we as a trade body have a wide range of highly experienced internaitonal transportation companies to assist you in shipping your new purchase. For details of members, go to our Member Search Page