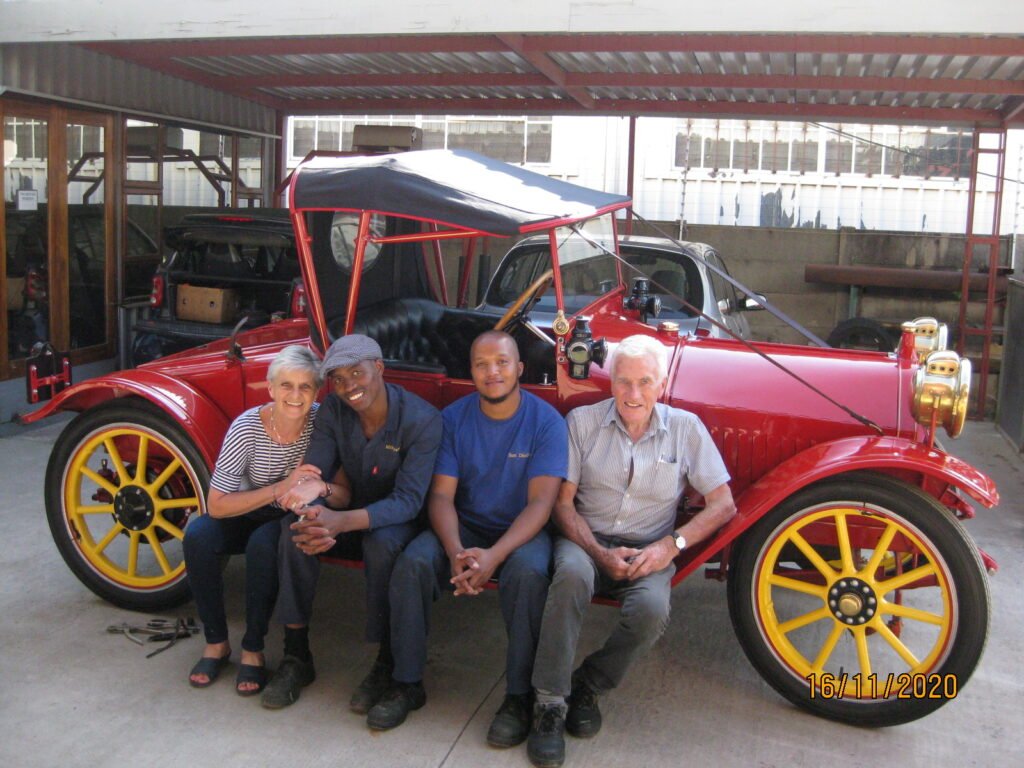 From our man in South Africa, Aubrey Malden

Aubrey here, your man in South Africa who’s found a real automotive artist for you here.

John Allison originally from Bradford restores, repairs, and exports his fine work from South Africa, some of it to the UK. He’s helped by his small, dedicated and the painstakingly careful team at Heritage Workshops along with a host of carefully selected suppliers.

The ‘Leonardo da Vinci of Bradford’ ( a nickname he picked up here from some insightful wag) arrived here, a young lad of 19 from “Up-North” where he was originally studying at Bradford College of Art in David Hockney’s time.

“Enough of that arty farty stuff my lad”

John’s father a true Yorkshireman, that is, a man with his eye on the bank account and, no doubt, deep pockets with barbed-wire at the bottom of them, took John out of art school with an unambiguous directive, “Lad, you’ll make nowt owt ta arty farty stuff, get into proper profession. Get into engineering lad.” Which John promptly did. Qualifying, at first, as a trained gearbox engineer.

And bingo, you have a talented creative artist with a brain of a highly trained and highly practical engineer. One with drawing skills, both technical, and arty farty, and fabrication skills as well.

He embodies another rare talent, one that is on the slide today. The joy of, as it were, of passing his talent on. To be more exact, of igniting passion in others. And to keep that flame burning, day after day, project after project. And that’s what John has done for Sam Dlodio, his very talented workshop manager.

Consequently, they have surprised many a client with their ability to turn their hands to full restorations of a number of cars from the 1920’s to the ‘70’s, including, for an international client, a Ford 1913 Model T Speedster, a 1911 Ford Model T Runabout and a Model T Centre Door, affectionately known as the Widow’s Car. This involved not only the mechanical and body work, but also the ornate interior, including the blinds and lacy drapery, all expertly handled by John’s wife, Barbara, in between her “day job” of looking after the accounts and financials with an eye as keen as a kestrel’s. The team also turned their hands to bringing back to life a roaring red 1957 MGA, and a shell of a Sunbeam Alpine into a real white knight of a car.

He also has fond memories of the sensuous and soft lines of E Types, Wolseley’s and XK 140’s, all of which have been through their workshops in Heriotdale, Jo’burg. But John is keen to point out although he loves the British cars, “Any car that’s a classic is a gem that deserves to be given back their original sparkle, for all to see.”

Making the complicated easy and affordable!

Today their website explains,” Heritage Workshop offers a high standard of comprehensive restorations, servicing & maintenance, mechanical, bodywork restorations, upholstery and electrical repairs for a wide range of classic cars and motorcycles…” What it doesn’t mention, sadly though is their inventiveness and creativity in managing to put together the equivalent of a 1000 piece jigsaw with 500 missing pieces.

A sense of automotive adventure.

Witness what they envisioned and created recently for the range of early Ford’s that I mentioned earlier. It would be an exaggeration to say they had to create everything, but for those essential bits, those final embellishments and mandatory pieces they did just that. Brass lights, radiator caps, new mechanical parts and body components, and the newly turned wooden spokes for wheels that had seen much better days, wobbling like a drunk on a Friday night after a few fine ales, and a late night sing-a-along.

John even offered to make a new rear window for my 1977 Mercedes 450 SL, from scratch!

As I mused his inventiveness and sense of automotive adventure John chipped in about Sam, “He’s absolutely meticulous. He can strip a car down, repair, refurbish it and assemble it.” And with a happy nod he adds, “ And he’s passing that onto our other essential member of the team, ‘Mtho’ ( Mthobisi Dlamini ) as well.”

Adding, “ Although Mitho is a bit of a racehorse you see. He wants to gallop on with a job. We need to slow him down. This profession is a thinking man’s profession.” Then John adds with a shrug of the shoulders, “ Still, keenness is a good trait. I’d rather have that than some right lazy bugger!”

John is at pains to point out to me how thinking a job through is a paramount procedure. “Every job that comes in, we sit down as a team, and discuss it. List the procedures and debate the implications. And agree who does what and when. You can save a lot of our client’s brass and time, that way.”

John points to the hoist at Heritage Workshop “ See that there. That’s the most important piece of equipment here. Cars can look great on top, inside and under the bonnet. But it’s that ‘lift’ there that can tell you the truth. The underneath. The foundation, the chassis. One good look will tell you how she’s been treated and what the future holds.”

It’s John’s attention to detail and appreciation of a job well done that makes John one of the go to people to appraise vehicles for insurance and sales purposes, and for you guys overseas, for appraisals for export as well. His knowledge of a wide range of cars makes Heritage Workshops a popular place for people to shoot the breeze, or to meet John at the Vintage and Veteran Club’s “Milk Bar” on a Friday night, or the last Sunday of the month for our regular meetings, where John and Barbara have been known to turn-up in a MGB GT, or TC. A Messerschmitt KR2021, A Jaguar E type and MK 2, a Sunbeam Alpine, or Sunbeam ’47 Talbot 2 litre, a  Morris Minor from’53, or anyone of the plethora of cars that have seen the best of their workshops.

Sheer artistry. Everyone a picture. And all inspired by a  Bradford lad, with a flee in his ear! Anything I can do for you as an SVA member, just give me a shout. aubrey@forenisc.co.za