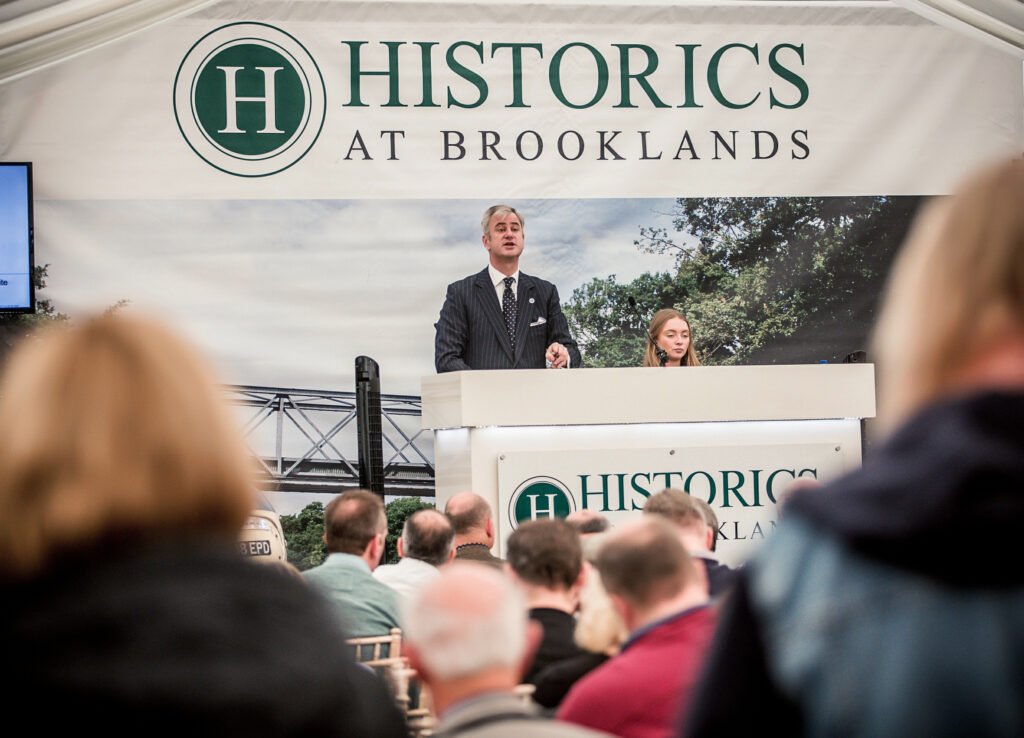 Historics 21st May Auction- Ascot Racecourse, looks set to yet again be an exhilarating auction day of some fine metal! Historics have always been a quality provider but in the last two years we can feel the values and popularity of their events increasing.

Our top 4 choices for this event are below, looking at both ‘Classic’ and Modern Collectible cars we think these will prove to be great buys to either own and drive or to keep as an ‘Investorcollector’ for their long term value.

Event Update: What an enjoyable show this must have been, and some very happy new owners left having secured some seriously collectible metal! Several Ferrari’s sold at the right money and two lovely hand build Bentley Reg & Green Label Arnage models. The later selling for the price of a family car! But for us the absolute bargain of the event was the nice if high miles 02 plate Range Rover for just £2,688. What an absolute bargain for someone to join the ‘enthusiast family’, join the Range Rover Register then enjoy every second of driving this car.. SEE THE FINAL PRICES AT https://www.historics.co.uk/

Our friends at Hagerty Insurance, not only have an excellent product for car enthusiasts but they also have probably the best ‘Values Calculator’ in the sector at www.hagerty.co.uk Owners can gain advice on the current values in the market place, but also then buy quality and well-priced insurance to include Agreed Value! Some insurers now charge to fully cast in stone the value of a car which is outrageous, but with Hagerty as an authentically involved insurer, its part of the great package of benefits.

THE TOP 4 BUYS THI MONTH AT HISTORICS 21ST MAY

First registered on 23rd June 1972, this desirable ‘CP’ 150 brake horsepower car was a UK home market supplied vehicle, which included the overdrive gearbox option from new. The car was purchased in the early 90’s by a Mr Wallin in Berkshire who, in 1994, began what developed into a comprehensive restoration spanning six years and resulted in a stunning outcome. The burr walnut dash is as new, likewise the double duck hood which complements the lovely blue coachwork and black trim. When Mr Brown in Bracknell purchased the car in 2005 the expenditure didn’t stop there. Being described as somewhat of a perfectionist he had Rees Bros. inspect the car prior to purchase. In 2013 Mr Brown had the engine reconditioned by Rees Bros. who also provided an evaluation on the car stating it was ‘an excellent example of this desirable sports car that has been looked after very well. It is in first class order throughout’. Having covered only minimal mileage since, the car presents just as it would have in 2013, one of the best we have offered, purchased last year by an international collector the car has been dry stored and will be lightly re-commissioned with new oil and filters coupled to a new UK MoT for the sale. Supplied with its UK V5C registration document, previous MoT test certificates and many receipts. This example, offered in its ultimate high-powered specification, is not to be confused with the average TR6. Its condition is fantastic and it presents extremely well in a desirable colour combination.

SVA Says: For our money, this car is well in the £20,000 to £25,000 values now and this will continually grow in years to come.. The key is that the TR6 is a real baby muscle car and you can feel the body twist as you rev that engine. Exceeding the larger sibling ‘Stag’ in driveability, style and values, for us the Triumph TR6 is still the best Triumph out there!

This pleasant example of a British automotive classic has been recently owned and cherished by an enthusiast, ex-Land Rover employee. The practicality of these four-wheel drives from Solihull has never been in doubt and this model is no exception having spent its recent years working on a farm in Devon. Benefitting from a towbar and a new floor to the rear cabin as well as Land Rovers legendary four-wheel drive capability, this split-screen Series III petrol version looks well in blue with a contrasting white roof and bonnet mounted spare wheel, and has just passed an MoT test. Presented to auction with a V5C registration document and offered without a reserve this Land Rover certainly deserves further consideration.

SVA Says: Having learned to drive and pass my test in a Series III, I am very familiar with this car and its great fun to own and drive. The long term money is in the originality of the cars, but they are supremely adaptable and can be personalised in just about every area possible. The SVA has a host quality parts and after-market suppliers on our ‘Members page‘. Values for classic Rovers is now high and increasing, with Series I cars in the £20,000 regions, with no reserve on this one, we think its a great investment.

Originally registered on the 21st April 1982, this Capri is a fine example of a modern day classic and presents well in blue metallic with a chequered cloth interior which is in good order. The 2792cc V6 engine runs well, and we are advised she drives with no known faults. This Ford Capri 2.8 Injection is a very nice example and very realistically estimated given the increase in values of such models of late. This MoT exempt Ford comes supplied with a V5C registration document together with a history folder with a number of receipts and bills. This 40-year-old Ford Capri is sure to attract the attention of classic Ford buyers given the modest estimate.

SVA Says: At 64, I remember this car well and its 3.0l predecessor., The 2.8i was the serious car to go for in the day, in a group that included Porche 944, Toyota Celica & Supra, and the mighty Sierra Cosworth. Rapidly increasing in values across the board and superbly practical to drive with space for 4 and luggage, this car was a real all-rounder and looked cool when you arrived. We like the livery of blue over silver and the all-important ‘Injection’ graphic, we love this car! In the day, an old friend Alan Powell in Birmingham bought one of the first ‘Capri’ cars when they entered the UK market and loved it, then instead of upgrading to the 2.8i as his workhorse went on to buy a Toyota Celica which he said was also one of the best cars he had ever owned too. (The only downside to both was that the usual soundtrack was ‘The Carpenters’).

Originally registered on 1st March 2002 this Range Rover has been owned by the same driver from new. Finished in the delightful colour combination of Oslo Blue with cream leather interior, the seats are piped in blue. The original book pack is present with this Range Rover and she comes with a comprehensive service history, together with a collection of invoices. These P38 Range Rovers have become well known for their durability and reliability. Earlier examples could be a little problematic, however this 2002 model was manufactured some eight years after the P38’s introduction, with most, if not all of the problems ironed out by then. Supplied with a V5C registration number, together with an MoT test Certificate valid until 24th February 2023, this is an opportunity to purchase one of the last Range Rover’s fitted with the Rover V8 engine.

The SVA Says: Range Rovers remain probably the most desirable 4 x4xFar as they say. With repeated models gaining value as they age and where kept in due form.. Mk1 cars with the original plastic seating, floors and even a hole to wash the muck out now exceed £20,000 in some cases. This car will be sublime to drive on a magic V8 carpet ride, powerful and fast with all the comfort and practicality you could want. Add to that the increasing values of nice examples like this one it’s a no-brainer.. The money is always in the vehicle’s provenance so this one comes with the original book and a host of invoices, exactly what the ‘Investorcollector’ needs.. Of course, you can still if carefully, get it dirty!

To register or visit the Ascot event see below

To find out more, register to bid and see the full list of lots, go to www.historics.co.uk