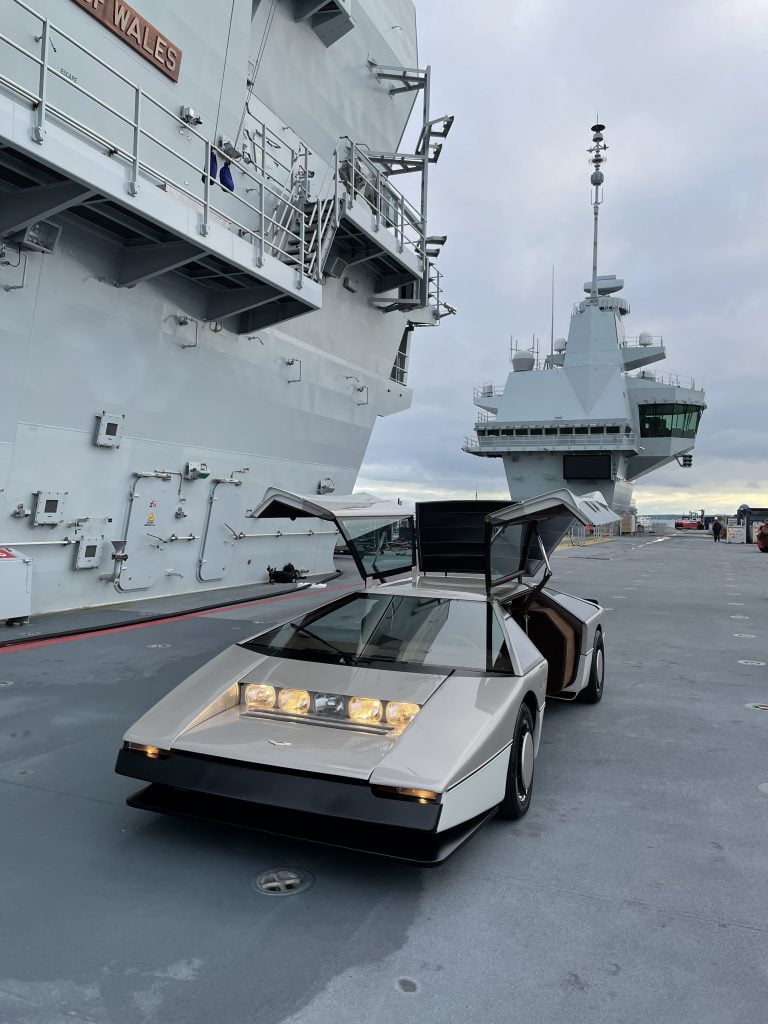 The Aston Martin Bulldog and HMS Prince of Wales are two very different feats of engineering. One is a brave supercar project from the late 1970s, and the other is the United Kingdom’s cutting-edge fifth-generation aircraft carrier.

However, as the Bulldog is hoisted onto the deck of the 65,000-tonne aircraft carrier on the chilly morning of November 8, 2021, it becomes obvious they share more in common than it might first appear; they are avant-garde British engineering achievements of their time, and neither has yet fulfilled their promised legacies – as different as they may be.

Another thing each machine has in common is the lengthy timespan required for their paths to cross. The HMS Prince of Wales – Britain’s second Queen Elizabeth-class carrier – took six years to build before it was launched in 2017, and it has only just completed its first open-sea test. The Bulldog’s story goes back even further.

The Aston Martin Bulldog was created in 1979, as a prototype destined to flourish into the world’s first 200mph supercar. On paper, it had all the ingredients to do just that: a 600bhp, 5.3-litre turbocharged V8, and aggressive, space-age bodywork with a slippery drag coefficient of just 0.34. Just one thing was missing: funding. And so, after reaching an incredible 192mph in 1979 and getting agonisingly close to its ultimate goal, the plug was unceremoniously pulled on the project.

But now things have come full circle for the Bulldog, and fate finally seems to be on the car’s side. The public and motoring media swooned as the car was dramatically unveiled by the Royal Navy, at The Concours of Elegance Hampton Court earlier in September following the completion of Classic Motor Cars’ (CMC) painstaking 18-month restoration.

The involvement of her Majesty’s Royal Navy in the car’s unveiling brought two ideas to fruition. The first was that the Bulldog would grace HMS Prince of Wales’ flight deck for photographs once the ship had returned from the rigours of testing in the open ocean. Thankfully, the operation went perfectly, despite the nail-biting spectacle of the car being hoisted aboard by a specially constructed crane.

The second idea was that the Bulldog would fulfill its destiny by finally achieving 200mph. The first high-speed runs will take place at a Royal Navy Airfield in a few weeks’ time.

Seeing the Bulldog at Hampton Court and now on the deck of HMS Prince of Wales at a Royal Navy berth in Portsmouth were both emotive days for Magneto. We have followed the progress of CMC’s incredible restoration from the beginning, and it features as our cover story for issue 12. The Bulldog has also been shortlisted for the Best Restoration category of the Royal Automobile Club Historic Motoring Awards, and the judges (including Magneto‘s David Lillywhite) were in attendance to inspect the Aston Martin on the ship.

All that aside, perhaps the main difference between the Bulldog and the HMS Prince of Wales is that we hope the latter never has to harness the full potential of its capabilities – or prove them, for that matter.

If you liked this, then why not subscribe to Magneto magazine today?

SVA Says: We think that Magneto magazine is probably now the best high-end serious collector-enthusiast Classic and Collectible Car magazine available. Subscription is a must for serious enthusiasts and ‘Investorcollectors’ to keep up to speed with happenings at this level. To read more or to subscribe, go to Magneto