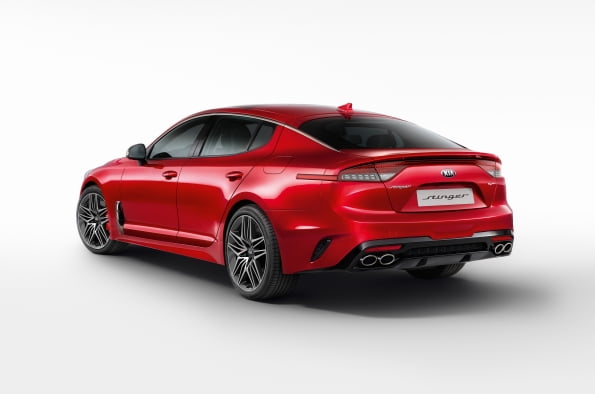 So, is the Kia Stinger GT-S a ‘Modern Collectible car?

The general definition of a ‘Classic car’ is a term used mostly for Insurance purposes, a ‘Classic’ would be an older car usually over 15-20 years, a second vehicle and used for limited miles (Usually under 4000). Depending on the insurer, a ‘Modern Collectible’ car, could be a car of higher value or limited edition run such as a Lamborghini, McLaren, Ferrari etc, they can less expensive models such as a Jaguar F-Type perhaps or a 10 year old limited run MX-5. (And, most insurers would like you to be paid up member of a car club of some sort or other).

But what about other ‘Future Classics’, well the ongoing growth in electric cars is redefining the world but for now what about this offering from Kia? One would not ever expect a Kia Optima, Sportage or even a Sorento 4×4 to become remotely collectible now or in the future, but what about this beast!

Here is what we know:

The upgraded Stinger boasts a re-profiled exterior design and has been enhanced to improve cabin appearance and quality. The upgraded cabin, in particular, reaffirms the Stinger’s credentials as the consummate grand tourer and the flagship of Kia’s European line-up.

The exterior notably gains a more high-tech light signature, with a new rear combination lamp spanning the width of the car. This creates a distinctive new light signature, which mimics the shape of the subtle spoiler integrated into the boot lid. New rear indicators, each comprising of 10 individual LED units, are arranged in a grid pattern – a motorsport-inspired design – which reflects the appearance of a chequered flag.

A new design for the 19-inch alloy wheels is also introduced, with intricate, geometric designs which enhances the sporty, grand tourer nature of the car. ‘Electric Blue’ exterior paint is also introduced to the ’GT S’ for the first time.

Inside, the overall architecture of the cabin remains the same, but subtle visual, material, and textural enhancements create a more luxurious ambience. New additions include a metallic finish to sections of the flat-bottomed steering wheel and a chrome bezel around the instrument cluster. The rear-view mirror is now frameless, creating a classy, modern look and also has the benefit of enhancing rearward visibility. The dashboard features Kia’s upgraded 10.25-inch touchscreen infotainment and navigation system and is further accentuated by new gloss black trim. New mood lighting allows the driver to select from one of 64 colours to subtly alter the character of the cabin.

Available to pre-order now from Kia showrooms, the Stinger ‘GT S’ is priced from £42,595.

State-of-the art technology with concert hall quality premium audio system
The upgraded Stinger is fitted as standard with Kia’s 10.25-inch touchscreen display. The infotainment system also allows Bluetooth smartphone pairing for two phones concurrently, enabling separate phones to be used for phone calls and music, for instance. Its advanced split-screen display lets users control or monitor different vehicle features at the same time, customising the screen with a series of different widgets. Apple CarPlay™ and Android Auto™ are standard, with intuitive voice control for many of the car’s features, such as heating and ventilation, audio and navigation. A wireless charger allows smartphones to be topped up without wires trapsing across the cabin.

The standard touchscreen navigation system has full European mapping and a Traffic Messaging Channel. Stinger also has Kia Connected Services with TomTom™ and UVO Connect, giving access to traffic, speed camera and weather information plus local search details in a number of categories, from the location of Kia dealerships to nearby restaurants.

A concert hall quality 15-speaker harman/Kardon® premium system with subwoofer, external amplifier and front centre speaker is featured as standard on the latest Stinger. It features Clari-Fi, which restores the sound often lost when digital music files are heavily compressed, and QuantumLogic Surround Sound, which redistributes signals from the original recording to deliver multi-dimensional playback.

The upgraded model includes a high-resolution 7.0-inch digital display within the instrument cluster. This full-colour display with vivid graphics for different driving modes delivers crystal-clear information to the driver between the speedometer and tachometer. It is also fitted with a customisable head-up display, which projects driving information onto the base of the windscreen in the driver’s line of sight. The system shows alerts from the car’s numerous driver assistance technologies, details of vehicle speed, and turn-by-turn navigation instructions.

The new Stinger adds features such as a ‘connected car’ Remote Engine Start system, which allows owners to start their car remotely using the Stinger’s smart key. A 360-degree surround view camera system is fitted, as well as front and rear parking sensors, giving the driver a bird’s eye view when manoeuvring in tight spaces. A smart key with button start is standard, and a Smart Power Tailgate takes the effort out of opening and closing the boot when your arms are full with shopping.

Safety systems are enhanced for 2021
The upgraded Kia Stinger carries over the same Advanced Driver Assistance Systems (ADAS) that it offered previously, as well as a series of new features and updates to provide even better protection for the driver, their passengers and other road users.

The latest cutting-edge safety technology has been added to the new Stinger, including a new Blind-Spot View Monitor (BVM) that acts as a ‘second pair of eyes’ for drivers by eliminating a driver’s left- and right-side blind spots. It displays a high-resolution video feed within the instrument cluster’s digital display if the driver indicates to change lane with another vehicle in their blind spot. The video feed comes from discreet wide-angle lenses hidden beneath the door mirror housings, giving drivers a wider viewing angle of their blind spots.

Safe Exit Warning (SEW) detects vehicles coming up from behind on either side of the Stinger when parked and stopped, alerting occupants with a sound and visual warning if they attempt to open the door into oncoming traffic. Rear Occupant Alert (ROA) provides a warning to the driver if they leave behind any pets or children when they exit the car.

Forward Collision-Avoidance Assist (FCA) now offers protection when turning across the road into a junction by identifying oncoming traffic on the other side of the road. Furthermore, it offers increased activation range when detecting a vehicle, pedestrian or cyclist. The Lane Keeping Assist (LKA) is now able to detect the edge of a road, as well as the lines in the road, providing steering assistance to prevent the driver leaving their lane without signalling. Blind-Spot Collision-Avoidance Assist (BCA) provides an enhancement over the existing Blind-Spot Collision Warning (BCW). Instead of simply warning drivers of cars in adjacent lanes, BCA helps drivers avoid a potential collision by applying differential braking.

Intelligent Speed Limit Assist (ISLA) is a new feature for the latest Stinger, with system based on traffic sign recognition. Driver Attention Warning (DAW) now has an increased operating speed of up to 130mph, and also alerts drivers if they fail to notice the car in front move off from a stop. The navigation-based Smart Cruise Control (NSCC) helps drive around curved sections of a motorway or A-road, automatically reducing the vehicle’s speed to an appropriate level before entering the curve. It reverts to the original speed as the vehicle leaves the curve and returns to a straight road.

The Rear Cross-Traffic-Collision-Avoidance Assist (RCCA) has been upgraded and now helps to prevent collisions with crossing vehicles while reversing by taking emergency action, whereas previously the system only warned the driver with a sound.

Stinger range focused on one halo ‘GT S’ edition
There is just one, high-specification version of the Stinger in the UK, powered by the tremendous 3.3-litre V6 T-GDi twin-turbocharged direct-injection petrol engine. Drive is sent to the rear wheels through an eight-speed automatic gearbox.

The twin-turbo V6 makes Stinger the fastest-accelerating Kia ever. From standstill to 60mph takes just 4.7 seconds, and the top speed is 167mph where permitted. Yet the extensive testing regime to ensure durability and responsiveness has also helped efficiency: combined fuel consumption is 28.0mpg, while CO2 emissions are 229g/km.

SVA Says: We think this car is a sure fired ‘Modern Collectible’ in exactly the same way the Saab Turbo, the Mistubishi Lancer and Jaguar XJ-R was a Modern Collectible of its day. This care has a real engine, its blisteringly fast, with technology coming out of its kazoo and will without doubt drive like the devil is chasing it. We love it and keep those miles low, keep it serviced and watch its long term values!