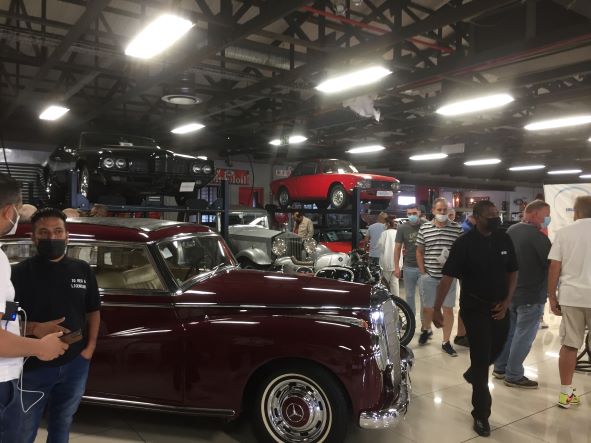 From Aubrey Malden ‘Our man in South Africa’

‘Hello again from South Africa.
Here’s a brief up-date on the heart-thumping auction in SA recently on the 4th December, which focused on
Legendary and Classic Cars. It achieved record prices, which further underpins our view that collecting cars as an enthusiast or ‘Investorcollector’ will continue to be an excellent idea in 2022.

The auction, virtual (to over 66 countries) and live in the showrooms of
Creative Rides in Bryanston, Johannesburg, broke all records on many cars,
but the stratospheric stars were the rare South African Legends, cars that
were built, requested or assembled only in South Africa. Making them rare
and desirable, in SA, and around the globe.

The rare South African built Ford Capri V8 Perana, after a frenzy of bidding
from around the world tore off the floor for a record £39,000.00.

The Ford Fairmont GT after another global bidding battle fetched a stunning £45,000.00. And the Alfa GTV, 3L, requested from Alfa in Italy but only built in
South Africa for South Africa racing, was involved in another fierce bidding
battle, which elevated the hammer price to the winning bid of £55,000.00. This
car remains in SA, whilst many others will make their way overseas.

At the other end of the spectrum of prices a 1962 Sunbeam Alpine went for
£7,500.00 and a MG BGT at £8,000.00
There were over 90 cars on auction with a good spread of prices from a
variety of manufacturers. From Fords, Opel’s, Merc’s, Sunbeam’s, VW’s
(Beetles’ and a Safari Bus) Peugeot’s, Chevrolet Classic’s, Fiat micro cars,
Lancia, and Studebaker amongst the many marques.

THANK YOU SVA.
I would like to thank Martyn for his support and to those members of the
Specialist Vehicle Association who showed an interest and bid in the auction, and who helped to
spread the news about the event and the rare, legendary and classic
vehicles we have here.

GET READY FOR ANOTHER IN JUNE 2022

The good news is Creative Rides will be repeating a similar auction in June
and December of 2022, which, once again will be focused on a selection of
Legendary and Classic Collector’s Cars and, again will be beamed worldwide.
I asked Kevin Derrick, CEO of Creative Rides, about the good prices, to which
he said classic cars here, with our kind climate, which are in good condition
and have precise and traceable histories have always done well here for our
local and overseas clients.

As SA cars are right hand drive vehicles they are particularly attractive for the
UK, New Zealand and Australia and the other 73 countries that also drive on
the left. Having said that it was interesting to note that there was a lot of
interest in this auction from Dubai. (A new and fast-expanding centre of interest in Classic & Collectible car ownership.

Wishing you all best in health, wealth and happiness in 2022.
Cheers, from your man in South Africa, aubrey@forensic.co.za

SVA Says: The association is delighted to have Aubrey Malden as our go-to for advice and more in South Africa. Our thanks to him once again for providing us with this excellent auction review. The world is growing smaller year on year and with SA driving on the RH side, we will be updating UK and other owners around the world on the benefits of importing vehicles from the perfect, dry environment of SA.