The one stop place to find out about this legendary car 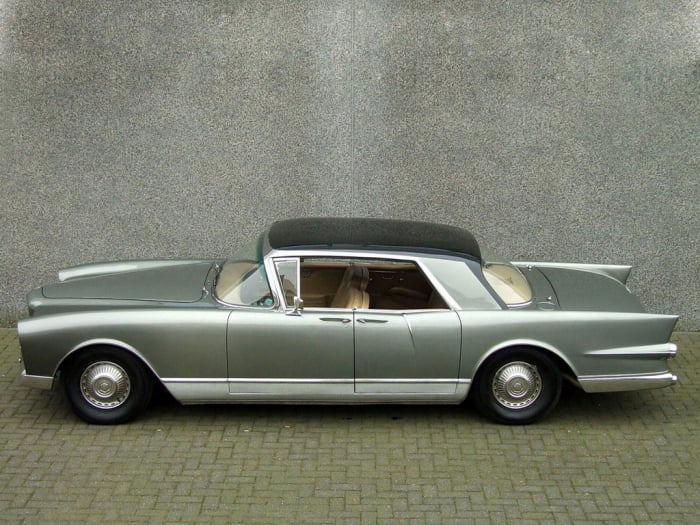 There are few cars manufactured that have the presence of a Facel Vega. Now highly collectible and increasingly valuable they have become sought after automotive legends. Much like the Citroen DS, you either love them or hate them.

We at the SVA absolutely love them, and we were delighted to welcome the club and its members to the SVA. If you are interested in buying a Facel vega go to Classifieds

‘Hello and welcome to my new Facel Vega site. My name is Bob Constanduros, I’m a Facel Vega owner of three cars in the UK and this is my Web site devoted to Facel Vega cars. I write for the Facel Vega Car Club magazine, the Bolide, so some of the articles you find here you may have seen before in that magazine if you are a member of the club. And if you’re not, there are links to becoming one’.

The Facel Vega was the brainchild of Jean Daninos, whose determination led him to recreate the classic French grande routière exemplified by Bugatti, Delage, Hotchkiss, Delahaye and Talbot in the years between the wars. After working with Citroen on the development of pressed steel bodies, Daninos established Forges et Ateliers de Construction d’Eure-et-Loir in 1939 for the manufacture of aircraft components and metal furniture, specializing in stainless steel. After the war, Facel built bodies for Panhard, Simca and Ford-France and also produced Pininfarina-designed coachwork for the Daninos-inspired Bentley Cresta, precursor of the famed Bentley Continental.

Building on the experience of these ventures, Daninos unveiled his first Facel – the aptly named Vega – at the Paris Salon in 1954. Over the next 10 years, the range progressed through the FV to the HK500 and Facel II models – all being fitted with the most powerful Chrysler V8 engines available. They were luxuriously appointed 2+2 coupes except for a limited-production limousine, the Excellence, produced from 1958 to 1962, with the remarkable feature of four doors with no central pillar.

In 1959 the Facellia was introduced at the Paris Salon. This beautiful two-seater convertible was a major step by Daninos towards his ultimate aim of an all-French car. The 1647cc twin overhead cam engine was designed and manufactured in collaboration with Pont-à-Mousson, who were already producing manual gearboxes for the Chrysler-engined cars. The Facellia range was later expanded to include two- and four-seater fixed-head coupes. Unfortunately, despite some advanced features and high power output for its size, lack of development and production difficulties caused disappointing reliability and the resultant poor publicity led directly to the demise of the company. Later versions of the small Facel were powered by Volvo or Austin Healey engines.

Approximately 2900 cars of all models were hand-built in the short life of Facel. All were stylish, luxurious and fast. Naturally they were also very expensive – prices for the Facel II were comparable to those of the equivalent Rolls Royce – and were bought by the rich and famous seeking something different and distinctive.

The exclusive styling and prestigious aura appealed to royalty and other notables – the star-studded list of owners is a miniature “Who’s Who”, with a shah, a king, ambassadors, princes and presidents, Danny Kaye, Tony Curtis, Francois Truffaut, Brian Rix, Ringo Starr, Lionel Bart, Joan Fontaine, and Ava Gardner (who had no less than three). To complete the grande routière image, great racing figures of the time such as Rob Walker, Maurice Trintignant and Stirling Moss, used Facels to cover the distances between the race tracks of Europe at high speed in comfort and safety.

In total, 164 of the cars were sold in the UK – only 62 are known to remain (the Club is actively trying to trace missing cars listed here). Because of these small numbers the marque has been largely forgotten except by classic car buffs and the few members of the Facel Vega Car Club, which must be one of the smallest clubs of its kind. In recent years however, some well restored cars have appeared leading to renewed interest in this first of the post-war EuroAmerican hybrids. The supercar appearance of the HK500 and the elegant French style of the Facel II create a stir when displayed today as much as when they were first seen, and the Facellia remains one of the prettiest and most well-appointed small sports cars ever produced.
We have to be thankful that Jean Daninos followed his star and we have the Facel Vega.

If you would like to know more about buying or ownership of Facel Vega cars, or to join the club go to Get in Touch Or email the club at facelvegauk@aol.com

SVA members are welcome to join our club