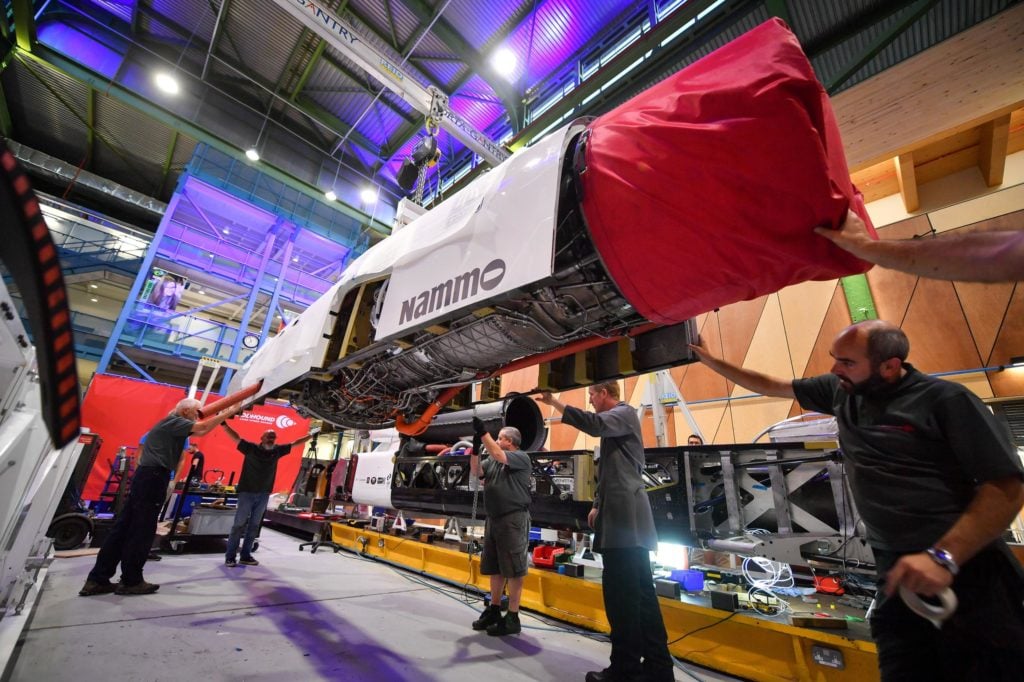 The Bloodhound LSR car has arrived safely at the Hakskeenpan desert, Northern Cape, South Africa, which for the next month will be home for the team, and the setting for the car’s first high speed test runs.

Before that can happen, the initial task is to re-assemble the car, which has traveled in a semi‑dismantled state from Luxembourg to Johannesburg by airfreight, before making the final 570‑mile journey to the desert on the back of an articulated lorry.

The high speed tests will see the Bloodhound LSR car blasting along the Hakskeenpan desert racetrack for the very first time, providing a spectacular showcase of British engineering to a global audience. The Bloodhound team’s primary objective is to engage and inspire people of all ages through the most extreme application of science, technology, engineering and mathematics.

The most powerful straight-line car ever was transported on the same pneumatic tyres as the car ran on in Newquay, and, as well as allowing the car to be manoeuvred on tarmac, they also increase the effective damping of the car, further protecting the car and systems from any shocks during its travels. Unable to stand up to the extreme stresses of high speed driving, these will be swapped out for precision machined solid aluminium wheels ahead of launch.

Once these narrower wheels, made specifically for desert testing, are fitted, engineers will be able to re-attach sections of carbon fibre composite bodywork to the front of the car, along with the nose section, which is vital for effective aerodynamics. The tail fin will also be fitted, completing the chassis and making the car ready for action.

The 25-strong team who flew out with the car joined an advance party who have been working tirelessly beneath the South African sun to set up the 50 x 50 m Desert Technical Camp on the edge of the Hakskeenpan desert. As well as the Bloodhound car itself, it houses a temporary workshop, complete with the precision tools needed to fine tune performance and maintain the car, including a lathe, milling machine and welding equipment.

The Bloodhound LSR car will be unveiled in all its fully assembled glory on the 21st October, before it begins the high speed test programme, during which it will build speed gradually in 50 mph increments over a month. The culmination of the four to five weeks will see the car hitting mind-blowing speeds of 500+ mph (800+ km/h).

Bloodhound LSR driver and current World Land Speed Record holder Andy Green said: “After years of work to prepare the car, and following almost a decade of preparation of our desert track by the Northern Cape Government, we’re delighted to finally be here. The next few weeks will allow us to test the car and train the team, ready for our assault on the Outright World Land Speed Record next year.”

World’s New Straight-Line Racing Track
The 10 mile (16 km) desert racetrack has been prepared by 317 members of the local Mier community, funded by the Northern Cape Government. They have moved a staggering 16,500 tonnes of rock from 22 million square metres of dry lakebed – the largest area of land ever cleared by hand for a motorsport event, and testament to the partnership forged between the Bloodhound team, the local community and the Northern Cape Government.

Bloodhound CEO Ian Warhurst explained: “The section of the track we’ll use is 16 km (10 miles) by 250 m, with large safety areas on both sides. This allows us to lay out up to 25 individual tracks side by side, if we need them. This is important as we can’t run over the same piece of ground twice because the car will break up the baked mud surface as it passes. We need multiple tracks so we can build speed slowly and safely – going up in 50 mph (80 km/h) steps, comparing real-world results with theoretical data – and Hakskeenpan is the perfect place to do this.

“The surface is hard, too, which means we’ve been able to design slightly narrower wheels that reduce aerodynamic drag. The desert surface also has a slight degree of ‘give’, which will work with the suspension to give a smoother ride, reducing vibration inside the car.”

SVA Says: ‘I had the great pleasure of meeting Andy Green some years back in the early stages of this venture, he was even then the World’s fastest man in 2014 having driven ThrustSSC to 763.035 mph with Richard Noble and team.. The most interesting thing was how approachable and friendly Andy was and how readily he was to chat to anyone sharing his enthusiasm for the task. Five years later we regularly follow Andy and would at some point like to become a sponsor in a small way ourselves… Martyn Raybould MD