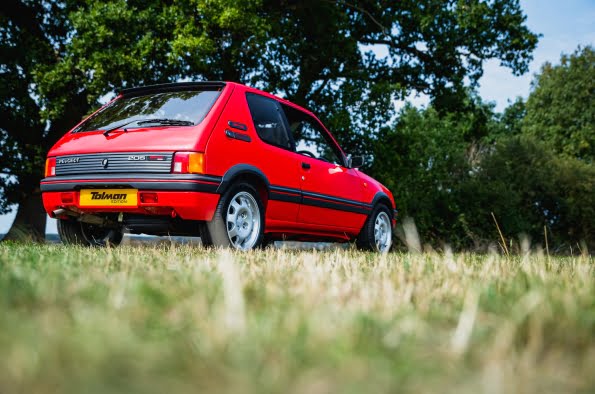 First customer Tolman Edition 205 GTI revealed! Based on the the truly iconic Peugeot 205 GTI hot hatchback, this will be an adventure into the past for us mid-life people with the memories, smart and studious ‘Investorcollectors’ with the cash and comfort to invest and serious collectors who can afford the price tag to simply revel in owning a Blisteringly fast blast from the past!

UK-based specialist Tolman Engineering has revealed its first customer ‘Tolman Edition’ Peugeot 205 GTI, a reimagining of the 1980s hot hatch icon with contemporary performance, reliability and convenience features to enjoy driving it today and every day. A bespoke ‘restomod’ built to the customer’s specification, it is arguably the definitive iteration of what is possible from the platform.

Drawing on Tolman’s extensive experience in restoring and improving historic and modern classics, and utilising parts it has engineered and manufactured in-house, the Tolman Edition follows the firm’s ethos for non-invasive enhancements (everything can be returned to standard) to create a 205 GTI that evokes the emotions of driving a well sorted example in period.

To gauge reaction to the concept of an improved 205, Tolman first built and tested its own 1600cc development car last year. After receiving critical acclaim for how it revived the authentic feeling of driving an engaging and lightweight hot hatch, the Warwickshire firm determined that the specification of that car would form the basis of a Tolman Edition. Customers are able to add optional performance or convenience elements based upon how they want to enjoy the car.

All Tolman Edition cars are carefully assembled at the company’s Warwickshire workshop from a freshly prepared, bare metal shell that receives the latest in anti-corrosion, stone chip and ceramic coating protection. From this starting point, it takes 700 hours to incorporate the performance and convenience features to revive and breathe new life into this icon.

Whether 1600cc or 1900cc, all Tolman Edition cars have a ported cylinder head for better breathing. The first customer car goes further and benefits from a significantly upgraded powertrain to offer more low-down torque for road use. Designed and built entirely in-house by Chris Tolman, who assembled British Touring Car Championship (BTCC) and World Rally Championship (WRC) engines before founding Tolman Engineering in 2007, its 1900cc engine now sports a ported 16V head and bespoke billet cam cover, whilst retaining the XU aluminium block. Tolman opted for this as opposed to the more common swap of the Mi16 unit as there is a larger scope for increased performance with the alternative cylinder head. Coupled with new cams, the power for a 16V car can be in excess of 200bhp.

Motec’s ECU with fly-by-wire throttle is also standard, delivering improved cold and hot starting and keener throttle response. Tolman’s own stainless-steel exhaust accentuates the 205 GTI’s rasp and features the traditional turned-down tailpipe, completing the factory look that Tolman strived to preserve. An optional Quaife ATB differential, coupled with standard Michelin Youngtimer PE2 15” tyres, improves traction with the latter ensuring the right balance of grip and compliance levels appropriate for a modern classic. Two aspects of the original 205 that Tolman was happy to lose were the gear shift quality and lighting performance. Now, thanks to upgraded shift rods and bushes, the fully rebuilt ‘box feels positive and has a slicker change. LED lighting, all around, is more reliable, brighter and longer lasting.

With an excellent base to start from, Tolman’s target for the chassis was to sharpen each element without sacrificing the fluid and engaging handling. To achieve this, Tolman tunes the Bilstein dampers in-house and fits its own adjustable bottom arms and bespoke rear anti-roll bar. Turn in is noticeably crisper with the rear more predictable, progressive and controllable. Power steering is standard on all Tolman Edition cars, ensuring low speed turning and parking are effortless. An optional ‘big brake’ upgrade with AP Racing callipers, coupled with standard ATEC CNC-formed stainless lines, provide fade-free performance and a consistent pedal feel.

Inside, the upgrades make a ‘Tolman Edition’ a delight to use every day. An optional Motec LCD anti-reflective dashboard display, as chosen by the first customer, replicates the analogue clocks of the original with the ability to display more data and access custom pages and designs. Fully retrimmed seats, new carpets and Alcantara steering wheel are complemented by electric windows and Blaupunkt audio system with discreet subwoofer, Bluetooth and DAB. 205s have always been attractive to take without consent, so Tolman’s first customer has opted to fit an advanced security system with remote central locking, integrated alarm, immobiliser, tracker system and smartphone control. Tolman also helps owners protect their cherished 205 with ceramic paint protection and front paint protection film (PPF) kit, tailored indoor car cover and smart charger all as standard.

“The overriding impression from those experiencing our development car was the emotions it invoked. Drivers stepped out of the car grinning, having rekindled that feeling that’s so hard to find when driving today’s sports cars on the road,” says Chris Tolman. “Back in the 80s and 90s, for me and I’m sure many others, 205 GTIs were a first taste in performance cars; something rewarding, responsive and engaging. We wanted to recreate that feeling of being at one with the road, a car you can just jump in and simply enjoy driving hard. Current hot hatches surpass these cars in so many areas but despite having loads of power and incredible dynamics, they fail to rekindle that emotional involvement that made us feel special with the 205.”

The starting price of £55,000 includes delivery within mainland UK, 12 months parts and labour warranty and a 12-month service and inspection at Tolman Engineering, subject to T&Cs.

Tolman has access to a number of donor 205s, both LHD and RHD, or customers can use their own car. More ‘Tolman Edition’ cars are planned, based on other 1980s and 1990s hot hatches, to provide the same non-invasive upgrades, blended with improved performance and convenience to enjoy every day. The next customer project is already in build and will be revealed at the end of 2022.

Founded in 2007, Tolman Engineering specialises in the preparation, restoration, maintenance and improvement of both contemporary and historic road and race cars.  Tolman uses its motorsport expertise, including most recently developing and competing in GT3 and GT4 other categories to design, engineer and produce a range of high quality performance parts.

Renowned for its expertise for improving Type 14 Lotus Elites, it has expanded to offer the same non-invasive range of components and services for the Peugeot 205 GTI with its fabrication, machining and engine rooms capable of undertaking much of the work inhouse. In 2022 it launched a ‘Tolman Edition’ Peugeot 205 GTI, a reimagining of the 80s icon with improved performance and modern amenities to use every day. Available to order, it is the first of a range of ‘Tolman Edition’ cars planned for release.  Tolman Engineering also operates a web store featuring motorsport equipment and parts, oils and lubricants and spare parts

SVA Says: At the princely age of 64 and having experienced the entire period of the eighties of cool hatchbacks, this is a very exciting car indeed. The Specialist Vehicle Association regularly see low mileage original cars go at auction for tens of thousands of pounds, so £55k for a hand-built super specification one sounds like a no brainer to us. And, given the likes of Aston creating multi-million-pound versions of bygone models to current safety and performance specs, we think it will quickly sell out. Good luck Tolman Engineering..