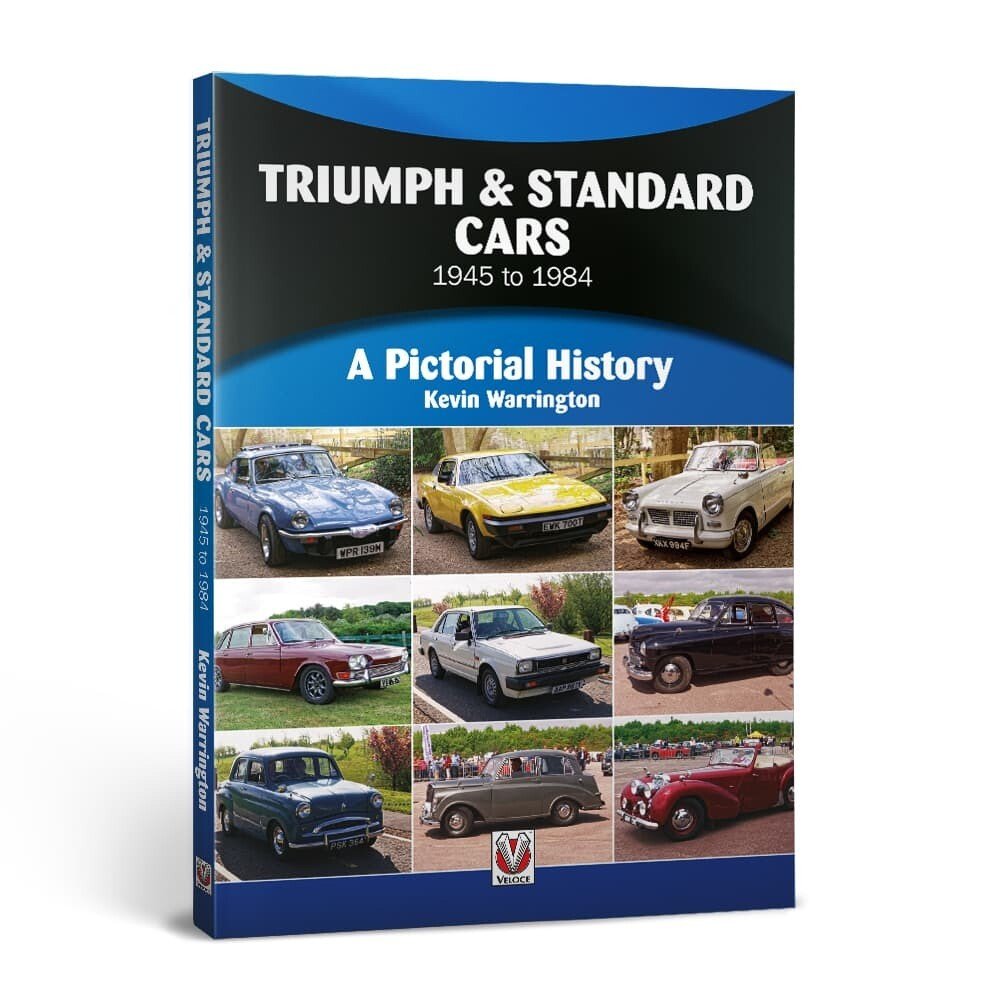 A Pictoral History of British cars

Great Britain enjoyed one of the most important places in the world of Motor Car manufacturing. With people’s car manufacturers including Vauxhall, Ford, Austin, Morris Triumph & Standard, Jaguar, Jowett, Wolseley, Rover, the ROOTES group and many more. Add to that the iconic names of Bentley, Rolls Royce, Aston Martin, Jenson and others and we get a feel for the influence Britain has had on the car in these excellent softback books.

Veloce, publisher of fine automotive books have produced an excellent collection of handy sized, detailed books on many of the most popular and important marques in the pantheon above. Each book offers a detailed list of models, facts, colours, options of the day and more, all very readable and backed up with hundreds of images of cars that will take you back to buying your own examples. Rover Cars 1945 to 2005 for instance, has details on 10 truly Rover models and an additional 25 ‘Rover Group’ models over those 60 years from the M model to the Rover 25, 45, 75 and ‘Streetwise’. To buy your own particular book of interest please use the ISBN reference when ordering from Veloce Publishing.

From just £12.99 enthusiasts can keep your own pictoral history of some of the cars you owned yourself, including:

About the author David Rowe: David spent his early working evenings in the 1960’s in an Austin dealership, before taking on a full time role as an accountant at Ford. He has helped build and race various cars, is a club Treasurer and has written two more books in the series, including ROOTES Cars, and Wolseley Cars.

The complete guide for Ford enthusiasts from 1945 to 1995 and some of the most popular cars of the era. With an informative history, detailed model by model from Anglia to Cortina, Escort to Grenada, it provides a comprehensive guide. Ref: SBN 978-1-787116-42-9 £16.99

About the author David Rowe: After many years working in the Ford accounting offices and dealerships, David is now retired. His knowledge, enthusiasm and understanding of these cars is extraordinary, he is also an officer with the Humber and Hillman Owners cars clubs and ROOTES Archive Centre Trust.

A handy pictoral and information guide for expert or enthusiast. the books details Morris and its place as a prominent marque from the era since it began production much earlier in 1913. Post war Morris cars were transported around the world, with many models produced in far off factories, many Morris models are as popular today by enthusiasts as they were in the day. ISBN: 978-1-787110-55-7 £16.99

About the author Ray Newell: Ray is a long standing classic car enthusiast with a particular interest in Morris cars. His first car was a 1964 Morris Minor purchased for £117.50 in 1974. An active member and officer of the Morris Minor Owners Club, he has been one of the British classic car’s most important influencers and enthusiasts. He has written extensively about classic commercial vehicles and Morris Minor in particular.

Featuring well known names including Hillman, Humber, Singer, Sunbeam and Talbot cars. The only full colour pictoral of some of the world beating cars from this company group. The books includes the cars and vans built from 1950 until the end of production in 1970, with a model by model list with hundreds of pictures and descriptions. Ref: ISBN 978-1-787114-43-3 £19.99

About the author David Rowe: See above

The Rover brand went through some tumultuous changes and was much fought over as an iconic brand based on build quality, to what many felt ended in a far less revered position with the small city car ‘Streetwise’. The book describes and illustrates all the greatest classic Rover cars up to and including the SD1, this car was a world beating design and should have become one of Rover’s best cars ever, sadly union issues and poor manufacturing resulted in a far less fine car than was imagined. It still though remains a cherished car for collectors. Ref: ISBN 978-1-787116-09-2 £12.99

About the author James Taylor: After graduating from Oxford and pursuing an academic career in Reading University, James spent 12 years working for local government. His interest in writing about cars was never far away and he continued in his spare time, now with over 100 books published and Editorship of Land Rover Enthusiast he is a powerhouse of knowledge and information on British cars.

In full colour and comprehensive detail, this excellent book on two of the most important British manufacturers is a must have for owners and enthusiasts alike. Each model is explored between 1945 and 1984 and illustrated in details in the pictoral history. With their crisp styling and solid mechanicals, these cars are fondly remembered by all enthusiasts. Ref: 978-1-787110-77-9 £14.99

About the author Kevin Warrington: Born into a family with a passion for and roots in the motor industry, he chose a different branch and studied and worked in electronics design. Early retirement allowed him to explore his lifelong dream of being an automotive writer on titles including Triumph, TR and 2000 cars. Kevin is a contributor to magazines and was editor of a specialist car club magazine.

SVA Says: Veloce Publishing has been an official working partner to the Specialist Vehicle Association from its very beginnings in 2019. They have been highly supportive of the association and have regularly donated books we have given to members in our regular free prize draws. Martyn Raybould MD