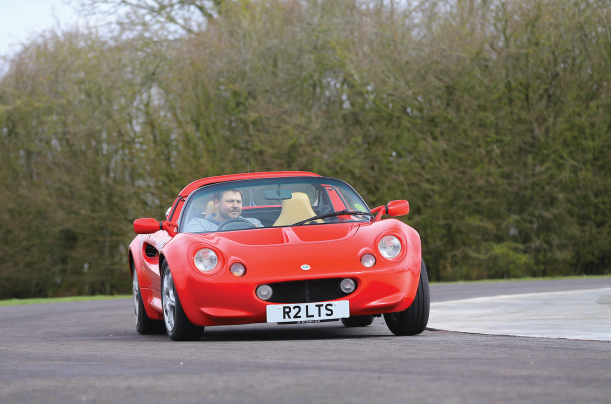 Why the Lotus Elise is so special..

From an article by Steve Cropley Classic and Sports Car: I’ve often wondered how it must feel to be Julian Thomson, the recently installed director of design at Jaguar. Pretty good, I should think.

Thomson has been at JLR for 20 years, working for most of those years as a close colleague to design director Ian Callum, and holding down a vital role as chief of Jaguar’s advanced design. Jaguar has to be advanced. It always has been.  Not enough people know this, but earlier in his JLR career Thomson spearheaded the team that created the original 2008 Land Rover LRX concept, the design that became the seminal Range Rover Evoque, a vehicle which became a huge sales success and was instrumental in putting Land Rover back on its wheels.

But here’s my point: despite his recent achievements I continue to think of Julian Thomson as the precocious young ex-RCA designer I met at Lotus more than 25 years ago, when he and the equally inspired chief engineer, Richard Rackham, formed a partnership to create the original Lotus Elise, the focus of the buyer’s guide in this month’s issue of C&SC.

In a funny way, the Elise’s achievements had some similarity to the Evoque, only they came a decade earlier.

The Lotus may not have had the raging sales success of the Land Rover (realistically speaking, there were never going to be buyers for more than 2000-3000 Elises a year), but it did find and confirm a new direction for Lotus design – as the Evoque did for Land Rover – while reprising all those oft-repeated Chapman design values: agility, fine handling, performance born of lightness, plus relative design simplicity because so many components had multiple duties.

The Elise remains desirable and focused even after 24 years in production. Though there have been several large refreshes and quite a few smaller ones, that confident original concept has not changed one iota, and (as successive managements have admitted) the challenge implicit in any change has always been to maintain the purity of that glorious Thomson-Rackham original.

Which Elise is best? I’m biased, because I’ve owned two standard Mk1s, which I happen to think were the best-looking of all. And, to me, the best Elise is the affordable one…

An aside on styling: when the original Lotus Elise came out, a rival in the same space was Renault’s great-looking Sport Spider; I can remember Thomson ruefully acknowledging the appeal of that car against his own.

But look at the Elise Mk1 now: it’s a superb evocation of classic Lotus styling but with modern proportions so it still looks modern. The longer you look the better it gets. Look also at the furrows the two cars have ploughed, Elise and Spider, as the years have rolled by. The Renault, always heavy despite its aluminium chassis, has led nowhere. Nice car, but a curiosity.

The Elise has pioneered a whole genre of cars using bonded extruded aluminium chassis, from more Lotus models to two generations of Aston Martins and even the latest London taxi. And that method of construction continues to be so potent – so affordable and so rigid – that it’ll be used under future Lotuses and Astons (and taxis and electric delivery vans) as far ahead as you want to look. One thing I learned from my two Elises was that they introduced a new level of Lotus reliability.

I’ve owned eight Lotus cars: Elans, an Excel, a Six, a Seven, and briefly, a Lotus Cortina. The best ownership propositions, by a mile, were the Elises. I admit, with evidence to back it, that the “Lots Of Trouble Usually Serious” wisecrack did apply, even if it wasn’t entirely fair. But not to my Elises. Apart from the well-known Rover K-series head gasket troubles (and I never had any), my understanding from other owners is also that Elises are dependable. Fast and dependable. Desirable, fast and dependable.

If I were Julian Thomson or Richard Rackham and I had that special, influential yet entirely attainable car on my CV, I’d be damned proud.